In 1987, at the opening of the Invertebrate Exhibit at the National Zoological Park, Edward O. Wilson, one of the greatest evolutionary biologists of our time, gave the invocation address, entitled “The Little Things That Run the World (The Importance and Conservation of Invertebrates).” This defining lecture changed the course of modern conservation and refocused our understanding of some of the least known inhabitants of the biosphere. In the exhibit and in his public discourse, bugs, moths, and beetles, along with Ed’s beloved ants—he was nicknamed the Antman, before there was a Spiderman—took center stage and highlighted the outsized role creatures without backbones (i.e., invertebrates) play in the machinery of nature. Insects pollinate our orange groves and the orchids of the rainforests, disperse seeds, and as nature’s custodians, remove dead carcasses from the scene, thereby minimizing the spread of disease. In any natural environment, in terms of biomass (the weight of living things), the largest percentage of animal biomass comes not from elephants or hippos but from invertebrates. Who knew? Ed Wilson, who left us in December 2021, certainly did. In his honor, this year’s theme for our natural history explorations of the Cabin John vicinity will center on the little things that run the world. Have your hand lens or magnifying glass at the ready as we take a deeper look.

Sometimes invertebrates can be pests, like the horse flies of the backyard or the now-pervasive Japanese mosquitoes of the courtyard. But our local invertebrates are also creations of great beauty and mystery, from the praying mantis and walking stick, which resemble twigs and leaves, to the butterflies, moths, and beetles, whose vibrant scales and exoskeletons are evolutionary jewels of nature.

Pausing, to Appreciate the Comma

If asked to select the punctuation that best expressed your personality, what would you choose? The most exuberant might go for the exclamation point; the most dogmatic, the period. For those who tend to run on, how about a colon? For you who harbor existential doubts, there is the obvious choice—the question mark. But for those most reflective among us, there is the comma.

If you chose one of the last two types of punctuation for yourself, the natural world holds a pleasant surprise: there are two beautiful butterflies, closely related, that live in our region, the Eastern Comma and the Question Mark. Known collectively as the Anglewings, because of the odd angles and edges in the shape of their wings (the genus name is Polygonia, or many angles), there are few butterflies more camouflaged. When their wings are folded above their bodies, the veins on the undersides, along with the ragged-looking edges of the wings, give them the appearance of a dead leaf stuck to a twig.

When their wings are spread out to gather the warmth of the sun, these two species are a study in orange wings with conspicuous brown spots. When their wings fold up again, the orange disappears and we again see the dead leaf incarnation. But look a bit closer with your macro-focusing binoculars, and you will see something quite unusual: on the ventral (underneath) side of the wing is a punctuation mark in silvery-white with a black border—a comma shape for the Eastern Comma, and a question mark for its congener, the Question Mark butterfly. For the rest of this essay, we will focus on the Eastern Comma illustrated here, a native to the eastern half of the U.S., although much applies to the Question Mark as well.

Although on relatively the small side, these butterflies are fast flyers and aggressive. A male will chase off other males that seek to pursue any females in the territory where it has perched.

They may also land on a sweaty person in summer to drink up the salt using the uncurled proboscis that serves as a tongue. Why salt and not the sweet elixir from flowers? Not all butterflies fuel up exclusively on flower nectar; the Angelwings will feed on rotting fruit and even rotting carrion. There is good reason for this expanded diet: most butterfly species don’t live past the summer season, but Eastern Commas can hibernate in our area. To do so, however, requires a greater intake of salts, minerals, and protein to survive. Around the time the Monarchs head south and other butterflies die off, the Eastern Commas look for an old woodpile in which to spend the winter. Then in the first warm days of spring they wake up and take off—they are among the first butterflies you will see on the wing—in search of tree sap as their first meal of the new season.

Another favorable aspect of the Eastern Comma is its choice of host plants. If you have a predilection for beer, you may like this butterfly. One of its favored host plants, pictured here, is the native hops vine, Humulus lupulus, whose flowers from female plants flavor your Budweiser. Butterflies of this species also like nettles. A patch of my native plant garden is dedicated to supporting Cabin John’s Eastern Comma population and includes nettles, along with a trellis of hops. I have never tried to collect the hop fruits for beer manufacture—my beer comes from the Bethesda Coop. But I share my garden with butterflies, few more beautiful and interesting than the Eastern Comma. Maybe you, too, can pause, respect the comma, grow some hops and nettles, and perhaps leave a woodpile in the corner of the backyard for this lovely resident. 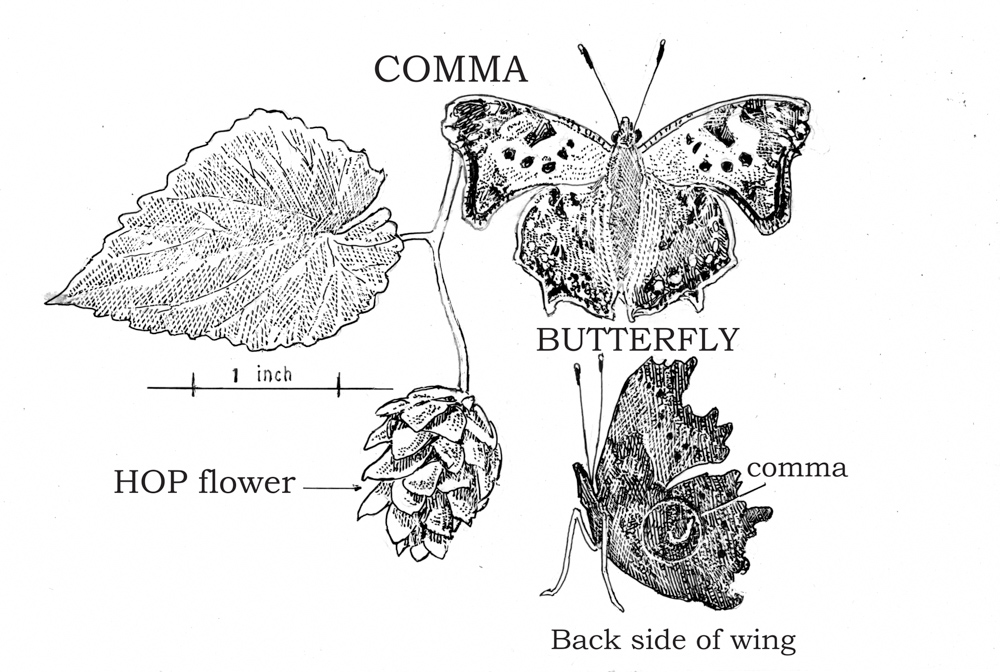