In the daytime, Cabin John’s tree-lined streets belong to adults in their cars and service trucks, kids on their bikes, and dog walkers or other pedestrians. But after dark, other mammals join the night traffic. Here on 78th St., one can see strolling white-tailed deer heading for the neighbor’s Hosta. At midnight, a clever fox sniffs around for rats and mice. But by far the most abundant night mammals on our street are the local bats. Stand under a sycamore or some other grand tree and look at the darkening sky; the first sixty minutes after sundown is bat hour. Look up at the right moment and there will be a flutter of something, and if it is light enough and you are close enough, you might see a pair of rounded, mouse-like ears around a furry little body tucked between broad wings. A bat! And if you had in hand a bat detector, a device that picks up the vocalizations of the flying mammals flitting overhead, it would most likely tell you, by the specific frequencies it registered, that you were watching the nocturnal maneuvering and feeding of brown bats in two sizes—little and big.

One aspect in which they differ greatly is their diets. Little brown bats prefer soft-bodied insects. If we only could train a swarm of little brown bats to follow us around at night (they do forage at times in groups), they would make short work of the annoying mosquitoes trying to bite us. Little brown bats can fill their stomachs in one hour while mosquito hunting, eating 150 or more in their initial feeding flight. Each night these bats can eat half their own weight in flying pests. But the real heroes of the evening are the big brown bats—they are devoted beetle eaters. Cucumber beetles, snout beetles, Japanese beetles—big brown bats have the strong mandibles and jaw muscles to crunch through the tough protective outer elytra exoskeletons to reach the juicy bits. And in so doing, big brown bats protect our crops, as cucumber beetles are a major scourge of corn crops, and are among farmers’ best friends.

Despite their small size, both the little and big brown bats live a long time. The record for the little brown is 34 years (average 7 years) and 20 years (again average of 7 years) for the big brown bat. Think about how many millions of mosquitoes a single little brown or how many cucumber beetles a big brown would eat in a lifetime? Knowing this, why would we want to remove them from our neighborhoods?

But that is what is happening, from forces we can control and one we cannot. If you use pesticides in your yard, you are directly leading to a decline in bats that protect us from insect swarms (not to mention the songbirds in our yards). Do nature and our mosquito-eating bats a favor by finding organic compounds to protect those roses. Or better yet, heed the pleas from last year’s columns and plant natives in your garden—you’ll never worry about chemicals or watering again.

There is another more insidious killer of bats: a disease known as white-nose syndrome caused by the fungus Pseudogymnoascus destructans. What a fitting specific epithet: destructans. On the outside, the effect of this disease causes the appearance of a white growth on body parts, including the nose, ears, and wings. Internally, the disease causes bats to use up critical fat reserves during hibernation periods, basically leading to starvation. The disease has become so widespread and with such high mortality that the little brown bat is now considered endangered, and other species of Myotis, like the Indiana Bat, face threats of extinction. Thankfully, the disease does not kill every bat in a colony and has skipped over some altogether. It also appears that some individuals are more likely to survive based on genetic variation: individuals that remain in torpor longer and thus store up larger fat reserves tend to be less affected. And there have been behavioral shifts, too, or selection for certain preventative behaviors. In hibernacula, the term used for places where bats hibernate, those where bats shun each other and roost singly are more likely to avoid infections. Being highly social seems to be a condition leading to disease spread, as white-nose requires close contact between hibernating individuals. It is reported that in some colonies where bat-clustering was the norm before exposure to white-nose, only 1.2% of little brown bats hibernated singly; after white-nose syndrome hit a hibernacula, 45% started finding their own spot.

In contrast, for reasons yet unknown, the big brown bat is unaffected by white-nose, and in many places the populations are increasing. One reason why big-browns may avoid white-nose, even in caves where it occurs, is that they hibernate longer and maintain much larger fat stores throughout the hibernation period. Clearly, in winter, in this age of white-nosed syndrome, it pays to be a really fat bat.

Even in August, our bats are gearing up for winter, swooping and swiveling, dipping and darting after all the flying insects they can eat. Cabin John is richer for them, and we wish them good dining. Let’s make the bats feel even more at home by keeping the big trees in our yards that offer them shelter during the day and shade our streets in the heat of summer. Save a tree, save a dozen bats, our natural bug-zappers. 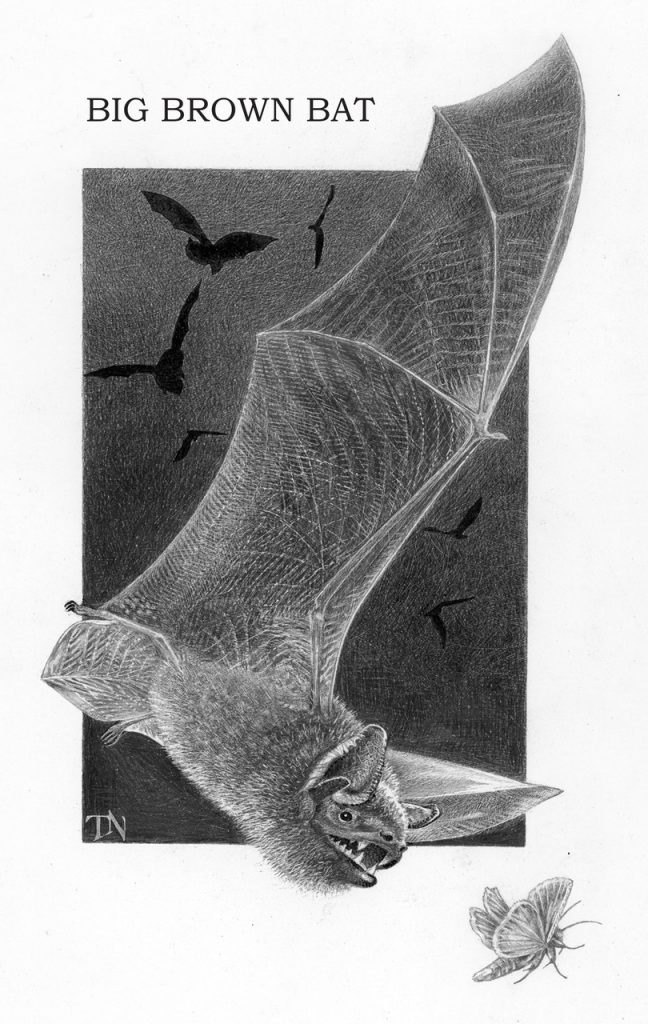