What is nature’s signal that spring is here? To the gardener, pink clouds of cherry blossoms and magnolias floating above beds of bright tulips and daffodils announce the start of the season. For naturalists, it is sound that takes precedence over the visual. Our backyard Northern Cardinal has brightened his chirping song, and the Carolina Wren seems to sing with greater gusto. Less melodic is the cacophony of Common Grackles, flocks of them, singing like a hundred small rusty gates swinging in the treetops, announcing it is time to pair up.

I am no herpetologist, but for me nothing marks the change of seasons like the chorus of Spring Peepers. If you want to hear them up close, go stroll along the Potomac at dusk between mid-March and early April. Stop and listen at the nearest pond in the canal bordering the towpath. You will hear the males singing en masse, a swampy symphony of Spring Peepers. An announcement that one of our most charismatic little frogs has come out of cold storage—frogs essentially hibernate during the winter—to resume the great rush to breed.

At first, the song of thousands of these amorous males may strike the novice nature lover as rather unfrog-like, especially if all you know are the boom of bullfrogs or the “ribbet-ribbet” of cartoon amphibians. Let’s work our way up the chorus: A single Spring Peeper sounds much like the chirping of a baby chick. Two singing at once sounds like birds dueting. But a chorus of Spring Peepers, when the number of individuals calling swells into the thousands, transforms into something otherworldly, like the sound of thousands of tiny sleigh bells ringing. Spring Peepers are known to call at other times of year, such as before they enter hibernation, but the early spring is the main amphibian hootenanny.

Their songs can be heard throughout much of eastern North America and into Canada, wherever there are their preferred swamps and ponds dotting the landscape.

Despite the loud chorus, when you stand next to a pond of peepers, they are often impossible to spot. For one, they only call when the light starts to fade. Further, they are tiny; about a dozen of these Romeos can fit in your palm. Each one measuring about 1 inch in length and weighing no more than 0.1-0.2 oz. Adult Spring Peepers can be either brown, tan, olive green, or grey. Across the back is a dark cross which gives the species its specific epithet (crucifer). The camouflage coloration makes them look like leaves on the pond bottom.

Males are slightly smaller than females—that is, until they start to sing. Only males sing, and when they do, they inflate a throat sac with air, and the expansion and deflation of the sac, like a balloon, makes the distinct peeping sound. We as humans share a lot of our DNA with other vertebrates and a not insignificant amount with frogs. But an inflatable throat sac is obviously not a feature we share. But imagine if Luciano Pavarotti could inflate a throat pouch to twice his body size and let loose? That is what a male Spring Peeper does.

What are females looking for in a mate? It is apparently the peep that attracts the females. But among a host of peepers, which one is the female likely to select? The one that peeps the loudest or the longest? Or can the females discriminate, and the winner is the male with the most perfectly pitched peep? The answer seems to be which male can call the loudest and most often that gains a chance to breed. Males mate with females, the eggs are later released at the edge of the pond, and after a few weeks, tadpoles emerge and grow into new peepers.

Being the loudest and longest singer is not always such a hot idea for an amphibian, however. When I was studying tropical bats during my PhD research in Costa Rica, I traveled to Panama to spend some time at a world-renowned research station run by the Smithsonian Institution, on Barro Colorado Island, in the Canal Zone. At the time, another PhD student, Michael Ryan, who went on to great recognition as an evolutionary biologist, was studying an amphibian called the Tungara frog. These common frogs would gather around shallow bodies of water, and the males would sing and sing in hopes of attracting a mate. But there is more to this story. Hovering over the singing party were large shadows, like black silk handkerchiefs come to life. These were frog-eating bats (Trachops cirrhosis) on the hunt. And as it turned out, Tungara frogs were a favorite prey item. Mike learned this because the bats, which I helped capture for him in mist nets set over the ponds, would, when brought back to the lab and placed in large darkened rooms equipped with speakers, fly instinctively into the speakers if Mike played a recording of the male frog’s calls through them. As it turned out, the Tungara males that called too loud or too often, ended up as bat food. But of course, those that rarely called had no chance of attracting a female. So, the trick was to call just the right amount, at the right moment, even if singing came with a built-in risk.

Why do frogs call at night? One reason almost all amphibians are nocturnal is to avoid the assortment of daytime predators. Every large predatory vertebrate that includes pond edges or stream banks as part of its hunting route eats frogs. At night there are still predators abroad, though: night herons, skunks, snakes, and even diving water beetles that feast on tadpoles and sometimes eggs. Those few amphibians that are active during the day typically live in humid, wet rainforests; many among them, such as poison-arrow frogs with their bright red, yellow, green, and cobalt blue pigments that warn potential predators to leave them alone, incorporate highly toxic compounds in their skin glands.

Being active at night also keeps amphibians out of the sun’s desiccating rays that would dry out their sensitive membranes. It is at night when the Spring Peepers leave the confines of the pond and move around at the base of bushes and up the lower branches to search for invertebrates—food they require to sustain another springtime ringing round of sleigh bells. 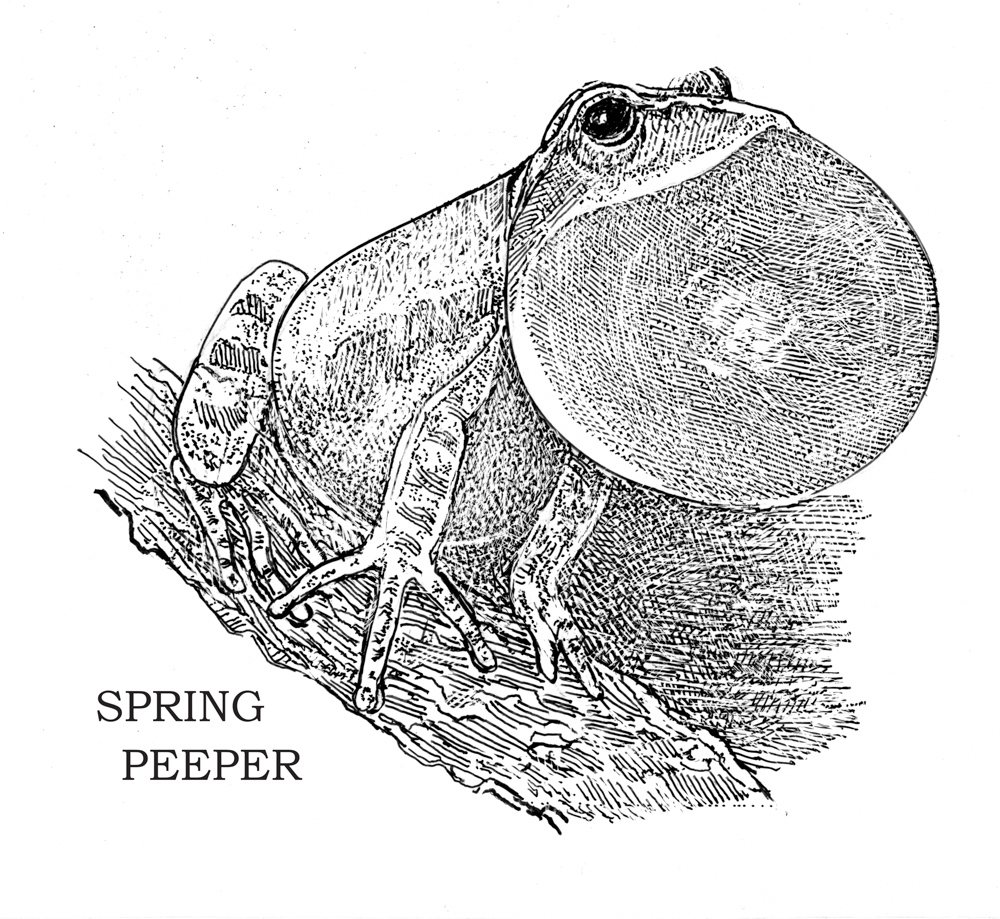