Our species has a fascination with top predators. Polls repeatedly show that the most popular wild animal in the world is the tiger. Lions also occupy a place high on the list. And the exaggerated alarm about the chances of a shark attack is rekindled in each generation of swimmers and beachgoers. Any animal of another species that could possibly kill a human—grizzly bear, mountain lion, and so on—typically elicits a powerful emotional reaction. There is an innate fear of some large predators, tracing back to the Pleistocene era populated by flat-faced bears and massive dire wolves, when even our ancestors were fair game for a tasty dinner.

Steven Spielberg probably never took a course in evolutionary biology in film school, but in Jaws he certainly mastered the style of tapping into primal fear. When it comes to portraying feathered creatures on film as frightening, Alfred Hitchcock was the first in his classic, The Birds. Thankfully, the Spielberg sequel franchise never branched out to other species: had the director of Jaws decided to go multi-species, he might have named his next opus Claws, starring the Great Horned Owl, among the fiercest predators you can find in the bird world, though not known in nature for attacking humans.

Here is a top predator you don’t have to fly to Alaska to see up close. The Great Horned Owl lives just about everywhere—including in New York’s Central Park and in some parks around D.C. And like the giant shark in Spielberg’s epic, Great Horned Owls will target as prey even species considerably larger than themselves.

The Great Horned, Bubo virginianus, is among the largest of the nearly 250 species of owls. Within the genus Bubo, it is second only to the Forest-Eagle Owl of Eurasia in size. The Forest-Eagle Owl is quite similar in appearance to the Great Horned and plays the same role in nature as one of the top avian predators. Modern genetic analysis, though, shows that the Great Horned Owl’s nearest relative is actually the Snowy Owl. As in almost all owl and many raptorial bird species, females are larger than males. In the case of the Great Horned Owl, females can be fifty percent larger than males, females weighing in at about 3.5 lbs. and males typically around 2.5 lbs. This barrel-chested owl is built for powerful flight: it is almost as fast as the Forest-Eagle Owl, which has been clocked at 40 mph, and almost as strong as the Eagle Owl and another species called the Powerful Owl, the latter capable of catching arboreal marsupials like gliders, possums, and even poor koalas.

But unless the Great Horned Owl gives its deep five-note hoot (the common name for this species in the vernacular is the hoot owl), you won’t easily see one. Aside from strong flight muscles and talons, the Great Horned Owl is a study in camouflage. Barred feathers help it blend in with the trees in which it roosts. What might call attention besides its robust size are the plumes or horns on its head. Like the long-eared owl and the Eastern Screech Owl, the Great Horned’s ear tufts are feathers that may serve a role in attracting mates. Like all other owls, the ears are on the sides of the head, placed asymmetrically to maximize detection of prey scurrying about the ground. Another distinguishing feature of this bird is its massive yellow eyes. Owls have incredibly sharp vision, particularly at night. In fact, proportional to their body size, owls have among the largest eyes among vertebrates, filled with rod-like structures that enhance night vision.

The acuity of their eyesight and hearing far eclipses their sense of smell. In fact, Great Horned Owls have no sense of smell. Some birds—vultures, some fruit-eating birds, and many seabirds, for example—do have a sense of smell, but sometimes a strong olfactory skill could be a disadvantage, especially if part of your diet includes the various species of skunks and weasels that are members of the Mustelid family. Some Great Horned Owls that are avid skunkers reportedly smell like their prey. Better not to smell yourself or your meal in this case.

Not just skunks, but virtually every other vertebrate in their territory, must beware, for this owl has been recorded to eat over 500 species of animals, some as large as young foxes and coyotes. Great Horned Owls catch a variety of songbirds and even go after other owls, like the Eastern Screech Owl featured in last month’s column. Falcons, even osprey, are not safe. But the mainstays of the Great Horned Owl’s diet are ground-dwelling rodents and insectivorous mammals that they often hunt at dawn and dusk. Even large insects are eaten when they are plentiful. If not fussy about their food items, Great Horned Owls seem also to make use of a variety of nesting spots. Tree cavities are ideal but Great Horned pairs are more than comfortable taking over stick nests of other raptors like red-tailed hawks, osprey, or eagles. Human-made structures, if suitable and in places with lots of rodents, are also prime nest locations. Perhaps their ability to hunt across a range of habitats and eat a wide variety of prey partly explains their massive range: from the edge of the Canadian and Alaskan tundra to Argentina.

The fierce gaze of this species belies a softer side. Great Horned Owls are devoted parents and invest much energy in raising their two young. They even tolerate the young of the previous year hanging around the territory before they move off on their own. When their youngsters do leave they typically travel less than several miles from their natal area.

So how did this bird get its Latin name? Bubo was the name of the pet owl of the goddess Athena. As such, owls have long been associated with wisdom and knowledge. That assignation makes sense: in the wild, banded birds have been recorded to live up to 29 years. Time to have accumulated a lot of wisdom and serve as a natural control of vermin on the ground. Fierce in appearance, we need these large avian predators to keep our forests healthy lest an oversupply of rodents eat all the native seeds in the forest, and prevent our forests from regenerating. Bubo the Great keeps nature in balance, and ecologists are thankful. 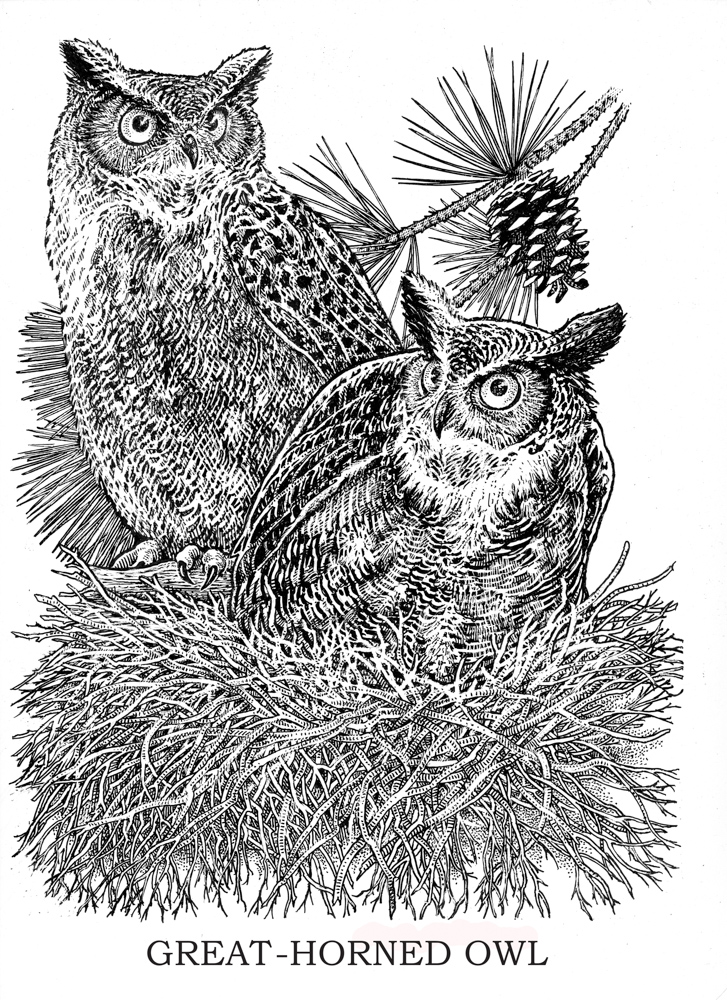