You don’t need an advanced degree in plant taxonomy to recognize goldenrod. From the passenger’s seat of a car speeding down the Clara Barton Parkway, there it is: golden fingers waving at you from tall green stalks. The splash of dazzling color in early August from this roadside fixture signals the approach of fall. Well into October, various species of goldenrod combine with asters, wingstem, boneset, and mistflower to make fall flowering a colorful passage into cooler weather. In fact, I used to think of goldenrod, when I was a budding naturalist living in Illinois, as the harbinger of autumn. I had no idea until I started my coursework in biology how much more goldenrod has to teach us about pattern and process in the natural world.

Let’s start with the basics: goldenrod is in the aster family, one of the largest in the world with over 23,000 species. Those zinnias, marigolds, sunflowers, and chrysanthemums in your flower garden, or the artichokes, lettuce, and endive in your vegetable garden—all are relatives of goldenrod. The green liquor known as absinthe in the Henri Toulouse-Lautrec painting is also known as wormwood, another genus (Artemisia) in the aster family. And “Aachoo!!!,” the cause of hay fever and fall allergies? Over there, at the edge of an unmown lawn, is ragweed (Ambrosia).

But don’t point the finger at goldenrod: it is pollinated by insects, unlike the wind- pollinated ragweed. Goldenrod does no harm, meaning it doesn’t trigger any allergic response. Goldenrod is one of the more diverse genera of the aster plants, with about 110-120 species in total, most of them found in central and eastern North America and a few in the United Kingdom. The name Solidago, goldenrod’s genus, comes from the Latin word “solida,” meaning “whole,” and “ago” meaning “to make.”

The cultural aspects of goldenrod are as interesting as the ecological insights its study offers. Goldenrod is a heroic plant in American colonial history. The story goes that after the Boston Tea Party, finding an alternative to the imported tea, Camellia chinensis, became a colonist’s imperative. Enter Solidago, and soon goldenrod tea became known as “liberty tea” (like replacing the French with “freedom” in French fries, I suppose). Goldenrod tea became the only tea rebellious colonists would drink during their protests against British rule and its hated taxes, imposed without representation. Eventually, goldenrod tea became a much sought-after export tea to, of all places, China, the original home of Camellia!

Most impressive of all, at the turn of the last century goldenrod made a short list for the ultimate accolade—national flower—in competition with the columbine, the daisy, and clover. There was drama surrounding the final choice and even fake news: In the 1940s while still a front-runner in the belated decision on a national flower, goldenrod was accused of being the cause of hay fever, no doubt because it shares the same flowering time as ragweed, the true culprit. Despite a later reprieve from plant science as the cause of allergies, goldenrod eventually lost out, but not until 1986 when the rose received the coveted honor of national flower, anointed so by President Ronald Reagan. A poor choice, in my view: one might say that if you have seen one cultivated rose, you have seen them all.

More seriously, the national flower is not even native to the United States! Although there are many native species in the genus Rosa, this was not the type of rose Reagan had in mind. He favored ones more like the cultivated roses that have no native pollinators and don’t produce nectar. In contrast, goldenrod is a native and a staple for nectar feeders, as well as a sign of good luck and fortune in many cultures.

But it is the ecologist who sings the loudest praises for goldenrods, because this wild native teaches us a basic lesson essential to understanding nature: that most species on Earth are rare. Among the 75 species of goldenrod in the United States and, in particular, the 23 species in our local flora, most goldenrods are uncommon—they have very narrow ranges, low population densities, or both. Sure, there is the ubiquitous Canada goldenrod along the highways and byways of the eastern United States, but in North America, these few goldenrod species that are widespread and common are the exceptions. Instead, many goldenrods are unique to rare soil types like calcareous rocks or sandstones.

Perhaps the most impressive of these is an endangered goldenrod species that was recently encountered in our area along the Potomac and part of one of the rarest plant communities on Earth, called a scour community. I wrote about this phenomenon a few years back in this column. The Potomac, like other wild rivers, scours out riverbanks and eddies during flooding events. Left in the exposed soil and scattered on the river boulders are the seeds of plants adapted for the wild river ride. When the water level drops, the floating seeds settle into nooks and crannies, germinate, and take root. Do they ever take root! This rare goldenrod has a thick rhizome that not only helps it to cling tightly to the rocks during floods but to store a lot of nutrients. The nutrient reservoir and the lack of competitors in this narrow ecological niche grant this goldenrod species a fate many of us would like to have: a very long existence. It is likely that the goldenrods you almost stepped on will outlive you and even your children.

But back to nature’s lesson: in any group of plants and animals with lots of similar species—a pattern repeated again and again, from deer mice to fence lizards to goldenrods—there are always a few species in the genus that are abundant and range widely, and a majority of species that are rare. It is this pattern of rarity that drives
us as scientists, and many others as well, to discern it, map it, and save these rarities, the precious gems of nature. 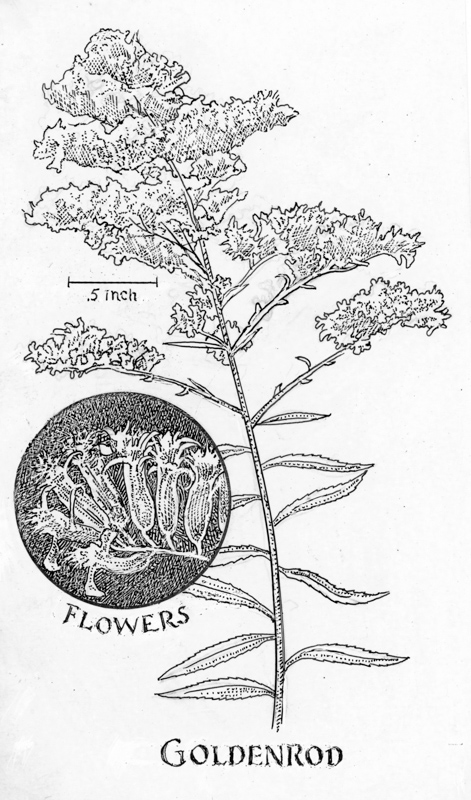