The end of summer cues the flowering members of the Aster family to take center stage. Fall aster, boneset, mistflower, goldenrod, wingstem, and even ragweed turn out for the last big flowering episode of the season. The warm sunny days of late August bring the most colorful aster of all, black-eyed Susans. They appear then seemingly everywhere, especially in garden edges. This local sun-worshipper is the state flower of Maryland, and happily a native species, ranging across much of the eastern U.S.

What sets off black-eyed Susans from other flowers is of course the brilliance of their golden yellow ray flowers (the petals) punctuated by a black or blackish brown disc in the center. The petals appear to have absorbed the sun’s rays so intensely
as to infuse them with a yellow-gold that brings happiness to those who gaze at the masses in the flower beds. The disk flowers attract a lovely visitor to drink the nectar, the American Painted Lady butterfly. This species undertakes long migrations here and in Europe where, across the Atlantic, it is believed some individuals have migrated from Iceland to south of the Sahara Desert.

The alternate-leaved plants have hairy leaves, thus earning Rudbeckia hirta as its specific epithet, hirta meaning hairy. Carolus Linnaeus, the namer of most botanical things, named our black-eyed Susan after Olof Rudbeck the Younger and the senior Rudbeck. Olof the Younger was Linnaeus’s patron and a naturalist in his own right. Olof the Elder was a scientist of many stripes: aside from discovering the lymph system, for example, he also created Sweden’s first botanic garden.

The black eyed-Susan is also known as coneflower, so named because the ray petals are displayed downward, showing off the darker center of disc flowers, much like a badminton shuttlecock. Perhaps this makes the seeds in the flower heads more accessible. The American goldfinches are now frequenting our gardens, feeding on those oil-rich seeds of the coneflower to build their fat stores (many of the species overwinter here). In fact, this for me signals summer’s end, the brilliant canary yellow- and-black plumage of the males and the less colorful females performing their looping, up-and-down flight, like seed-fueled stunt pilots flitting from one flower bed of black- eyed Susans to another. The males twitter a melodic finch song as they move from patch to patch, one of the more joyful songs in nature. The bright yellow and black of the birds, the brilliant flowers they seek out for seeds, and their song of summer’s end— together they remind us how good it is to be alive, even in the age of COVID. 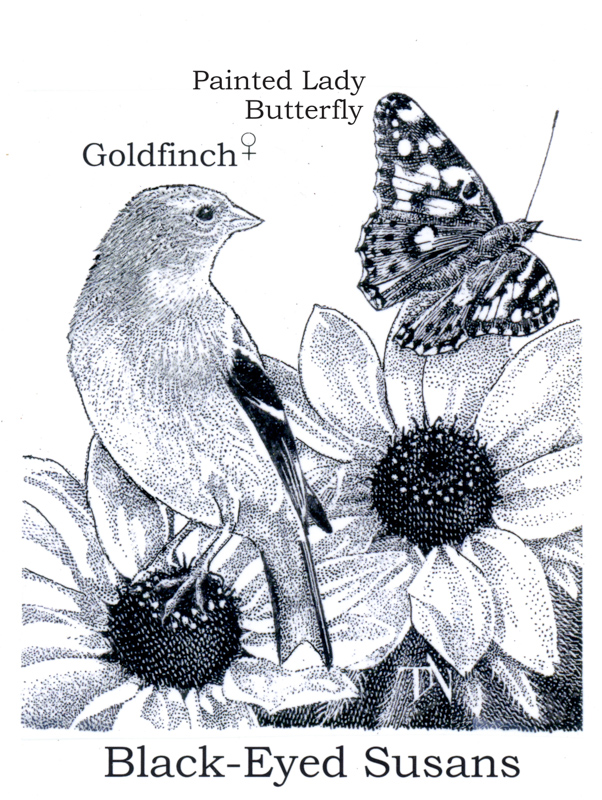