Tall oaks, hickories, tulip trees, hackberries, or maples create a lovely canopy in a yard and a veritable ecological umbrella: as food for an abundance of caterpillars that attract birds; shelter for bats that eat mosquitoes; protection from soil erosion during our increasingly violent rainstorms; and in summer, a much-welcomed ecological service—natural cooling of our houses by shielding them from the sun. In the current climate crisis, those trees store a lot of carbon in their trunks and roots, so homeowners that coexist with trees are thereby doing their part to draw down greenhouse gases and maintain a livable biosphere for future generations. But one inescapable ecological consequence of a tree canopy is the dense shade it creates for any plants below. What among our native flora can we plant that appeals to the eye and flourishes without need of abundant sun?

There are several shade-loving plants to welcome to our gardens such as the wild ginger covered earlier this year. This month’s topic plant offers a most striking gardening solution: Jack-in-the-pulpit. This plant looks like it belongs in the tropical rainforest rather than in Cabin John; in fact, most of its relatives live close to the equator. Yet, there it is, growing happily along forest trails in the neighborhood park. Arisaema triphyllum, as it is known, is a native species of the understory of the Eastern Deciduous forests ranging from Nova Scotia to Florida and west to Texas. Also called bog onion, brown dragon, or Indian turnip, Jack-in the pulpit grows to a height of about two feet. It is a perennial, meaning that once you plant it, it will keep coming back. Some of the Jacks growing along the Cabin John trail may be older than the adults who hike past them.

The most striking feature of the plant, and its namesake, is a large purple-striped “hoodie,” called in botanical lingo a spathe. That is the pulpit. Standing in the pulpit is “Jack,” the eight-inch long flowering stalk, called a spadix, resembling a miniature corn cob in yellow-green. This spadix-inside-a-spathe, or Jack-in-the-pulpit, is characteristic of Jack’s plant family, the Arums (Araceae). So now you can think of the more familiar Philodendron, Monstera, Dieffenbachia, Spathiphyllum, or Anthurium occupying a pot in your living room as an indoor Jack-in- the-pulpit.

Also interesting about this plant, aside from its sensuous looks, is its reproductive sex story. Spoiler alert: there is a Jill-in-the pulpit. Lining the spadix are densely packed flowers that are either male or female. But here is where it gets complicated. The plants start off the flowering season as male. As the plant ages and grows larger, however, the spadix starts making a lot more female flowers on the stalk so Jack becomes Jill. We call this in the botanical parlance sequential hermaphroditism. Enter the fungus gnat attracted to the male flowers by the peculiar scent. They are trapped temporarily inside, where they become sprinkled with pollen grains. The fungus gnats make their escape from the male plants, but once they find the female plants they fall inside and cannot escape. Crawling up through a female stalk, the fungus gnats deposit their pollen on the stigmas of the female flowers. The plant is unable to self-pollinate because by the time the female flowers on a plant have matured, the male flowers have withered and died. Thus, the female flowers need to be pollinated by the male flowers of a different plant. This mechanism prevents inbreeding and contributes to the genetic vigor of the species.

The fruits are smooth, shiny green berries that cluster on the spadix. They ripen to a bright red in the fall and are eaten by wild turkey and wood thrush. If you gather 0the seeds in the fall from your garden you can scatter them on the soil and they will germinate, creating more baby Jacks and Jills. It may take several years before a flower appears, but with a bit of work you can cover an area with these beautiful plants. The fruits ripen in late summer and fall, turning a bright red color before the plants go dormant. Each berry produces 1 to 5 seeds. If the seeds are freed from the berry they will germinate the next spring, producing a plant with a single rounded leaf. Seedlings need three or more years of growth before they become large enough to flower.

Underneath that mysterious looking stem and flowering part is a corm, an underground storage organ common to crocuses, gladioli, or cyclamens. This part can be dried, cut thin, and fried like potato chips, but it’s better to leave it in the ground to make more Jack-in-the-pulpits. The plants are a bit toxic, though, which is why the deer seem to avoid them, another plus of the species for the deer-persecuted gardener. If you really want to go wild, there is an even more sensuous-looking native member of this genus, the green dragon (Arisaema dracontium). It grows several feet taller than the Jack version, and has a long snake-like spathe. (When it comes to related snake-like plants, Arisaema speciosum is the famed “cobra lily,” a non- native from Asia that could scare young children.)

With a host of elegant Jack or Jill-in-the- pulpits or green dragons, the shadiest part of your garden could also become its most mysterious. 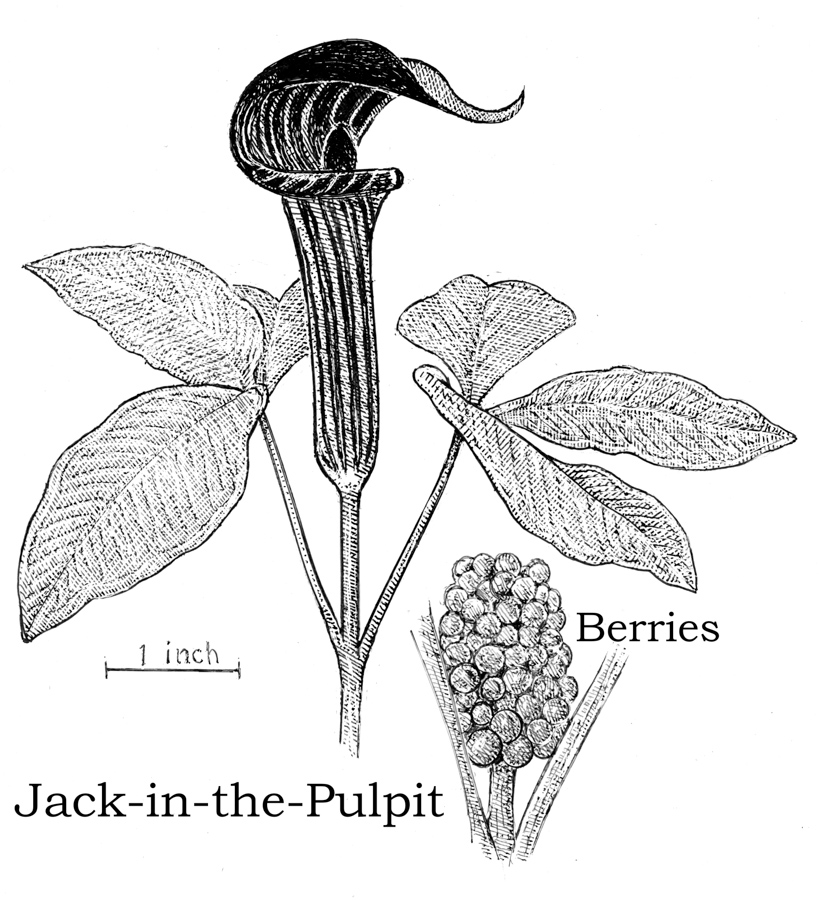