A glorious benefit of living in the tropics is the wide variety of trees and vines that delight the eye with explosions of vivid blossoms. Often these large showy flowers, designed to attract bees and other pollinators, cover all the branches or stems. Even the names of these trees are suggestive or mysterious: Golden rain tree, Golden Trumpet, Yellow Bells, Flamboyant, Flame of the Forest, African Tulip, Jacaranda, Coral Bean, Rosy Trumpet. These trees and their displays are even more spectacular when the flowers precede the flush of new leaves. In contrast, it is rare to find native trees in the temperate zone covered by clouds of flowers in the spring. For sure, there are the ornamental cherries at the Tidal Basin or planted in Kenwood, but those are imports. There is the ubiquitous redbud, but its flowers are tiny compared to the African Sausage tree. Trumpet creeper is an aggressive native climber and that counts, as does Catalpa. Our best native candidate for most spectacular flowering tree, however, is the White fringe tree, also known as the Virginia fringe tree.

That species grows very well in our area but ranges north to New Jersey. There are even specimens found in New York City. But its stronghold is in the southeast to central Florida where every spring, adult fringe trees issue forth a seasonal wedding dress of lacy white fringy blossoms. Arborists tell us that the more sun the fringe tree receives the more prolific the flowering.

When you drive by one in a car it is as if the wedding dress is suspended five feet above the ground minus only the bride. The four white petals of the blossoms are unusual in how thin they are. Masses of them, though, cover the crown of the tree before the tree fully leafs out in May. Male and female flowers typically occur on separate trees but sometimes on the same tree. On female trees, a bright blue fruit appears in the late summer or early fall and is devoured by the American robin.

The fringe tree is a member of the olive family, with its characteristic four petals and opposite leaves, and the fruit is somewhat reminiscent of a blue olive. More familiar to us are green ash and white ash, which are also members of the olive family. And herein lurks a small concern. In the western part of its range, the fringe tree seems to be affected by the Emerald Ash Borer, a non-native jewel beetle from Asia that is finishing off our ash trees but so far has left the fringe trees alone. Experiments are underway with the introduction of a parasitic wasp from Russia that controls ash borer. The wasp burrows into the tree and lays its eggs on the ash borer larvae, killing them as its own wasp larvae feed on the host.

The fringe tree is a little-known wonder, and in my opinion not planted enough. I see so many vacant (only grass front lawns) lots in our neighborhood, in full sun, where a well- placed Virginia fringe tree would bring decades of joy and an appreciative warble from the robins in the neighborhood. Do you want to beautify Cabin John? Easy, plant Chionanthes virginicus and amaze your neighbors. 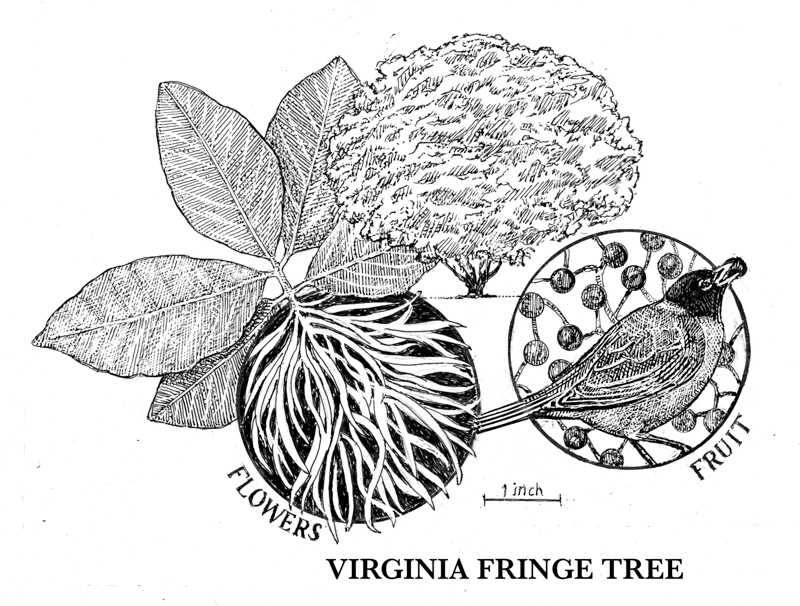