Every spring, Mother Nature rolls out her most exquisite carpets for a limited time only. Rarely is it a red carpet, but throws in shades of yellow, blue, purple, and white on a green background are plentiful. There are the displays of Virginia bluebells, the lacy green foliage and peculiar pantaloons-like flowers of Dutchman’s breeches, the sprawl of wood violets. Nature only keeps these carpets out to catch the sun’s rays for a short while: return a month later and they will have disappeared, buried below ground until the next year.

Botanists call these spring beauties (an actual common name of a common wildflower called Claytonia) spring ephemerals, ephemeral because the whole life cycle of the plant—emergence of leaves, flowering, fruiting, and dieback of the aboveground tissues—happens in a month or less. The early flowering is triggered by several cues: growing day length and increasing warmth of the soil, availability of nutrients, and the buzzing of pollinators like bees and flies. But most of all, it is sunshine—an abundance of it flooding the forest understory with photons between the Ides of March and the leafing out and closure of the canopy trees by mid-April. As one botanist put it, the spring ephemerals emerge during the short time when the forest is not a forest, but more like a prairie.

My favorite spring ephemeral has a shorter time on stage than almost any other— the American trout lily (Erythronium americanum). First come the alluring mottled brown and green leaves, the pattern resembling the sides of a brook trout. Emerging above the splayed leaves is a comely yellow flower with six fused petals. Jump to see this display when you hear of it in the neighborhood because nature doesn’t wait around for your procrastination. For about one week after the first blossoms emerge—which seems to be the duration of flowering—a carpet of yellow on green blankets parts of the Cabin John Creek Trail (the flowers close up at night, so nocturnal botanizing is fruitless). A few days of rainy weather and deep mud on the trail, and all but the most avid hikers can miss this impressive display.

Making the carpet of these blossoms even more scarce is the fact that many trout lilies rarely flower until at least four years of age. Even then, sexual reproduction in this plant is rather scant, with less than 10% of the population producing seeds; most spread by underground bulbs branching off from a full-grown plant. Another fascinating challenge is that trout lily puts much more effort into deeper penetration of the bulb into the soil than do other members of the lily family, more than two feet down.

Barring blockage by some impenetrable surface, the plant will continue to grow downwards rather than upwards. A tip to gardeners: if you want to force your trout lilies to flower, dig a six-inch hole and place a flat rock at the bottom and fill it with rich soil. Once the plant’s bulb encounters the rock, it sends up a flower rather than trying to force its roots through or around the rock.

Trout lilies die back every year, but how long do these perennials live? Some colonies of trout lilies are as ancient as they are vast; some are estimated to be 300 years old. Imagine, wildflowers that far outlive humans.

Perhaps the most interesting ecological feature of the trout lily, though, is that this species, like many plants featured in this column and in our flora of spring ephemerals, has evolved to have its seeds dispersed by ants. Attached to each seed in the pod is a fleshy fatty tissue called an elaiosome that attracts several species of intrepid ants. These ants carry the seeds to their burrows, away from seed predators lurking in the colony, and give the seeds a safe spot for germination. In return for their labors, the ants feed the fatty tissue to their larvae.

Mother Nature rolls out her trout lily carpet each spring but not exactly like clockwork. Climate change is likely altering the emergence time of spring ephemerals and possibly the life cycles of the pollinators—flies and bees—and seed dispersers, the ants.

Scientists, naturalists, and citizen scientists are closely monitoring the timing of ecosystem cycles of germination, flowering, and the arrival of pollinators to study how climate warming may be affecting their synchronization. Japan reported last week that its famous cherry trees blossomed this year on the earliest date in 1,200 years.

Will we see trout lilies and other spring ephemerals appear earlier in the calendar? Will the bees be there to greet them? 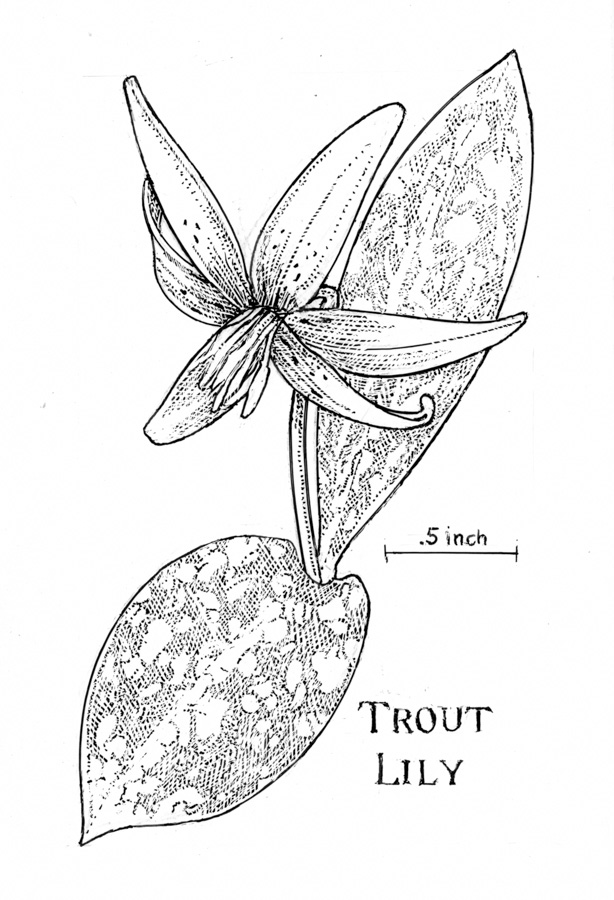