The new trail high above Cabin John Creek is a wonder. On my first hike along this route, I marveled at the stunning views from on high, looking down through the forest canopy. Birding in spring from there will be a joy if one can keep an eye out for mountain bikers. The route winds its way past majestic trees that escaped the loggers’ saws. These cove forests harbor massive tall tulip poplars and chestnut oaks, probably because they grew up on slopes too steep to log. But absent is a most sorely missed resident—the American chestnut.

Once upon a time, about 200 years ago, the forests in Cabin John and along the entire Appalachian Mountain chain looked much different than today. They were filled with giant American chestnuts—a hundred feet tall and up to five feet in diameter. The American chestnut is a native to eastern North America, a member of the same family as our lovely beech and oak trees. Like these other species, they produced an annual abundant crop of nuts, often three to a cluster, that fell to the ground where they provided nourishment for deer, turkeys, bears, pigs, and humans (of course). Unlike oak acorns, the nutritious nuts of the chestnut could be eaten raw,  and were far more tasty. And the wood, although not as valuable as some oaks or cherry, had a straight grain, was easy to work, and was highly resistant to rot. It served as the basis for entire industries such as the production of railroad ties, railroad-car construction, and, from its extracts, tannins for the leather industry. The species was once so abundant, it is estimated that in parts of Pennsylvania, for example, chestnuts accounted for 30% of all the individual trees in the forest. Some historians believe that it was the demise of the American chestnut that led residents of Appalachia to abandon the dying forests and turn to another resource found below the ground—high-sulfur-content coal.

Officially, the cause of the demise of the species’ abundance was discovered in 1904 officially but perhaps the decline occurred even earlier informally. The American chestnut is a part of a genus (Castanea) that includes species native to Europe, China, and Japan (the chestnuts you buy in the market today are C. sativa, a smaller version of the edible nuts). It is estimated that from the start of the decline in 1900 to the last standing chestnuts in the 1930s, over 30 billion trees died.

What caused this valuable tree species to disappear and the forest to turn over, its place filled by other trees? Ironically, a place erected in part to save endangered species—the Bronx Zoo—became the entry point of the American chestnut killer. Asian species of chestnuts were imported to plant on the zoo grounds, and with them came a fungus called the chestnut blight. The Chinese chestnut is resistant or even immune to this blight, a fungus known to science as Cryphonectrica parasitica. But within about 20 years, the fungus spread to native American chestnuts, which had no resistance to it. The spores of the fungus could live on neighboring oak trees and infect its chestnut neighbors. The effects were so devastating that virtually all of the chestnut trees in the eastern U.S. were wiped out. Here is the odd discovery: the fungus eschews the roots of the chestnut, only infecting the above ground tissues. Even more surprising is this: when the mature chestnut becomes infected and apparently dies a few years later, it’s not really dead. If the base is left intact in the ground, the American chestnut is a vigorous stump sprouter. New leaders emerge quickly and the shoots, well, shoot up. Saplings can grow for about a decade or two and then, wham!, the fungal infection returns and the young tree saplings die back again. It’s an American tragedy: the trees try to recover only to be felled as an adolescent, the cycle repeated over and over.

For decades, devoted chestnut lovers have tried to bring the trees back, using cross-breeding techniques developed for other plants to create a blight-resistant chestnut. These efforts have borne little success. But we live in a world of rapid scientific evolution both in theory and technique. New genetic methods have been applied to transfer disease-resistant genes to American chestnut seedlings. Infection, or resistance to the blight, appears to be controlled by just a few genes, and if the right mix can be found, in theory we can regrow our chestnut forests.

Enter the ethical dilemmas: should scientists “play God” and alter the genetic structure of the American chestnut to make it blight resistant? If successful, would it become a genetically modified organism, known as a GMO, or a GRO, one of the first genetically recovered organisms?

My vote is full speed ahead with the genetics program. We already have so altered our forest structure and composition; for example, losing ash trees to the imported emerald tree borer and Eastern hemlocks to the hemlock wooly adelgid (a beetle and a sucking bug, respectively, both native to Asia and covered in earlier columns).  In some places our forests are described as senescent, decimated by over-abundant, browsing white-tailed deer that prevent edible seedlings of native trees from becoming established. Humans have long modified plant traits dating back at least 10,000 years. Transgenic trees are created today using more sophisticated techniques. And just as we hope to create an American chestnut resistant to chestnut blight, perhaps we can someday genetically modify a blight by making it so much less virulent that it is rendered virtually harmless. As we live in a world of novel coronaviruses, and other pathogens that infect humans via zoonotic spillovers from other mammals, we may wish for the scientific expertise to rapidly create vaccines, not only for humans but also for American chestnuts.

Perhaps someday, 50 years from now, future residents walking along the Cabin John Creek trail will hear the thud of chestnuts falling to the ground from mature replanted, blight-resistant trees with bears and turkeys eagerly waiting below.

And so ends this year’s articles. The shared theme has been invasive species that threaten or whose spread diminishes our local nature—an ecological downer. Next year returns with a much more hopeful theme: a year of articles featuring glorious native plants to plant in your yard (you have the time). Your family can create your own private national park, be it five square feet devoted to natives, or your entire backyard. And in these articles Trudy Nicholson and I will introduce a marvelous nursery of plants attractive to native pollinators, fruit-eaters, and your own sense of aesthetics. By joining us in planting natives, you will not only be beautifying Cabin John, you will be helping the world by drawing down carbon. And life on Earth needs all the help we can give it right now. 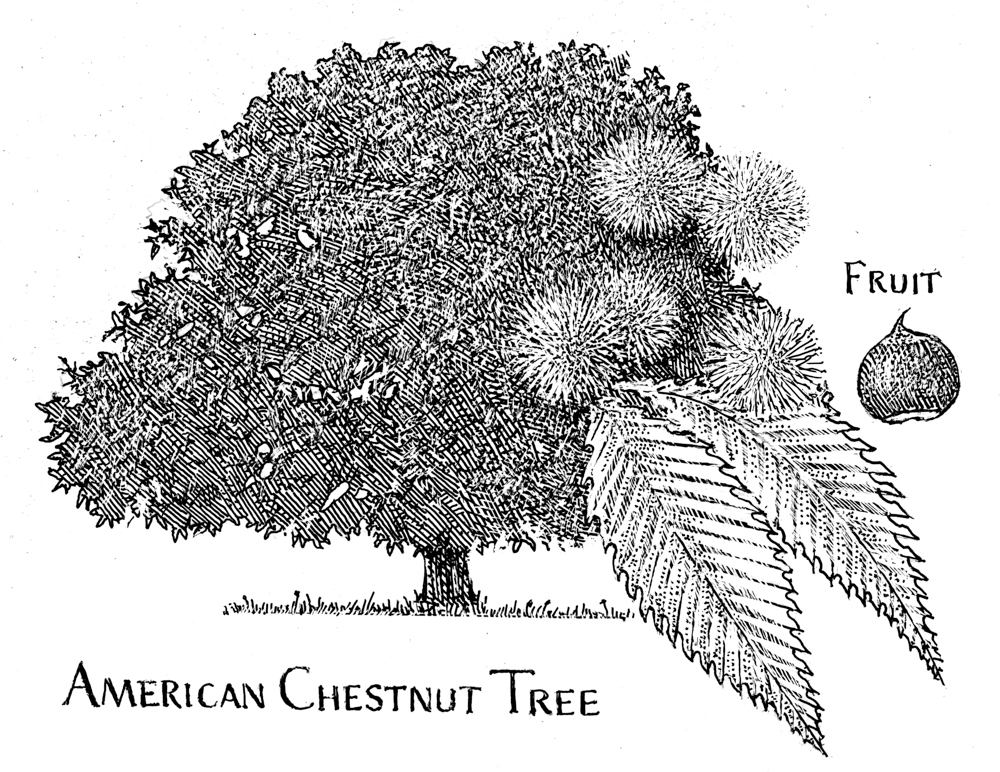