If only the founding fathers had decided that the walls of all academic buildings in New England colleges be covered in Virginia creeper, our vibrant native climber. How much more intense our autumn color would be if this woody vine—a study in scarlet foliage—were the main attraction. In fact, the only other native plant that out-crimsons the Virginia creeper is another native, poison ivy. But among the three most common climbing woody vines in our area that occasionally strangle trees, the third, English ivy, is an exotic invasive.

You might be partial to Downton Abbey, or to Westminster Abbey, but English ivy is one entity of the sceptered isle we and our forests can live better without. If you walk or bike along the towpath from Washington, D.C. to Cabin John, you will see an ecological demarcation at the border between the District and Maryland. On the D.C. side, thick columns of English ivy twine around the trees between the towpath and the Potomac River. The funds or effort have not been mustered to rid the forest of this plant pest. Yet once you cross into Maryland, English ivy has been snipped at the base, yanked, and stripped from the trees once draped in this climber. Forest stewards of the local conservancies have so far kept pace with attempts of this freeloading vine to re-establish itself.

There are more than 250,000 species of flowering plants in the world, and about 2,500 make their living as climbers rather than as free-standing plants. Those that have green, herbaceous stems we call vines and those with woody stems like poison ivy, Virginia creeper, and English ivy are termed lianas. Native climbers can take over tropical forests in areas of little or no human disturbance and account for as much as 40% of the leaf canopy. In most forests, though, native trees have learned to cope with hitchhiking vines and lianas. Except where the hitchhiker is an alien species like English ivy.  English ivy and other non-native climbers can so overload the host tree that they shade out its foliage, sometimes leading to death of the tree. In some instances, the added weight of the lianas growing up its trunk can topple a tree. The fallen liana, meanwhile, does not die but keeps spreading, searching out a new host to climb.  A walk through our local forest shows that English ivy is far more destructive than Virginia creeper or poison ivy as both of these natives tend to be more common only at the edge of the forest. English ivy can attack anywhere.

How did English ivy become such a headache to maintaining the health of our native forests? It was first reported in the 1800s in Virginia, but it was likely brought earlier to these shores by the first colonists. Later, perhaps in an effort to add Old World luster to the campuses of some of America’s most renowned and oldest colleges in the Northeast, the walls of academic institutions were covered in English ivy. This gave rise, of course, to the group name of a set of these colleges. Not to be outdone, other colleges, private schools, and public schools followed the style. English ivy soon spread to gardens and stately houses.

Once established, English ivy fruits in abundance; its bluish berries full of seeds ingested and then spread by the cedar waxwing, American robin, and mockingbird and the imported and ubiquitous European starling and house sparrow. Now every gardener in the East is familiar with English ivy.

Another reason English ivy has proliferated is that it is evergreen. While Virginia creeper and poison ivy shed their leaves, English ivy is a tough customer, holding on to its green foliage and photosynthesizing even in the dead of winter. It is the grip and the heavy load of vine and leaf material, though, that threaten the host trees the ivy clings to as it races skyward to grab a better position in the sunlight.

So the best thing to do is to learn to recognize English ivy as a citizen scientist, and then take the next step and become a citizen pruner. In its place, the beloved Virginia creeper and the less-loved but colorful poison ivy vine are likely to appear: two climbers that the native flora evolved with and can coexist alongside.

As we live in the era of climate disruption, one important solution to retaining a living biosphere—one where the inevitable increase in average global temperature stays below a 1.5 degrees Celsius—is to plant more native trees. Trees are the greatest invention in millions of years of evolution for drawing down carbon dioxide from the atmosphere. But to give them a chance, we should weed out the destructive, invasive species, like English ivy, that don’t belong here.

I am not anti-English ivy. In its natural environment, in western and eastern Europe, it is an important food source for native birds. English ivy also has historical significance: the early Romans recognized ivy as a symbol of intellectual skills, and ivy wreaths were awarded to those who won poetry and athletic contests. But let’s remove the crowns of English ivy on our native trees along the Potomac and help to save our forests. 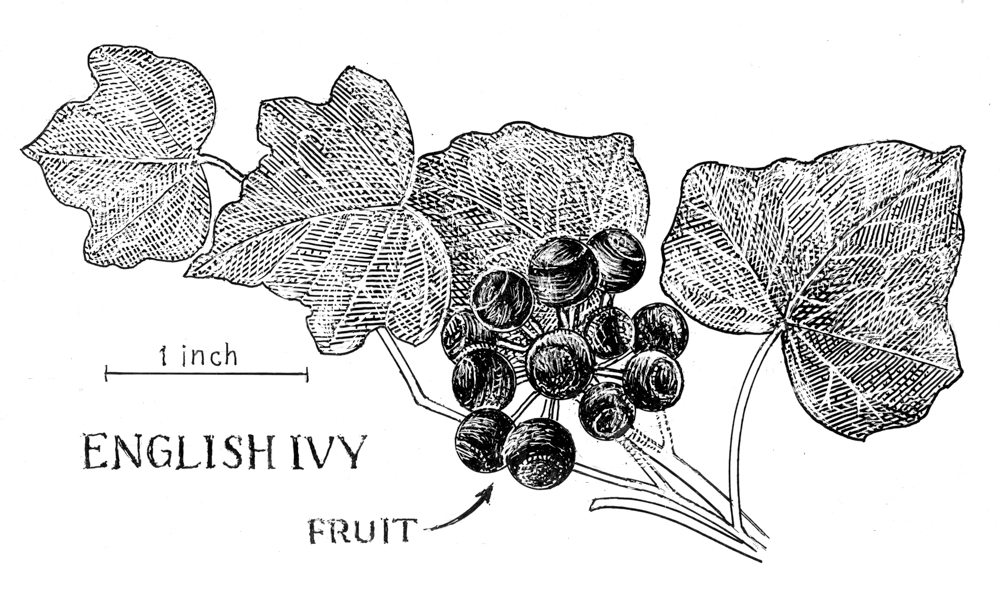