A beginning naturalist’s pop-quiz: Wintercreeper. Does the name refer to:

If you have been following the themes for this year’s columns, you will know that the correct answer must be “C.” We are nearing the last of the tales of the dirty dozen or so alien invasive plant species that threaten our natural habitats.

One of the worst of these invasives is also, perversely, one of the most attractive, which partly explains its broad reach. Wintercreeper, also called Fortune’s spindle, is a spreading vine native to China that was first brought to the U.S. around 1907. Cultivated as a garden favorite for the bright purple undersides of its leaves and its rapid growth as a ground cover, horticulturalists created lots of variants. Some sport golden-edged foliage or white trimmed margins. Over the decades, a horticulturist’s delight has become an ecologist’s nightmare. Wintercreeper is one of our fastest growing invasive plants and can rapidly climb over bare areas of the soil and penetrate deep into the forest, even in areas of dense shade. Not satisfied with an earthbound niche, the vines routinely climb up trunks to strangle trees. And when sticking to the horizontal, it can shade out any living ground plant that lies in its way.

Probably every gardener in Cabin John has come upon wintercreeper. American robins, attracted to their bright orange seeds with fleshy arils attached, devour the fruits and drop seeds in the garden. So, no matter how vigilant you are in your backyard weeding, every spring you can find baby wintercreepers sprouting from seed. Even more likely, if you fail to pull out the entire root system when you yank out wintercreeper, it will return to say hello next spring. Wintercreeper is not just a Maryland phenomenon; it is considered a serious invasive across the Eastern U.S. and ranges far into the Midwest and south to Texas.

Wintercreeper belongs to the same genus, Euonymus, as strawberry bush, the native shrub that, in my last column, I encouraged local landscapers to plant in place of Leyland cypress. All members of the genus have the same attractive types of fruits and bright green leaves, but we want to see strawberry bush flourish in our neighborhood to feed our local birds because it is native and not destructive of the local ecology. To round out other members of the genus Euonymus in our area, we also have wahoo or burning-bush (E. atropurpureum) and winged burning-bush (E. alatus). Both of these species offer brilliant fall foliage, especially winged burning-bush, which turns a vivid pinkish purple. When the leaves are turning, you can spot winged burning-bush along the towpath. When sunlight backlights the foliage of the non-native winged burning-bush, it is among the most beautiful in nature. China is its native habitat; here it is just another problem species, however lovely. And beneath the winged burning-bush, its companion interloper, wintercreeper, can often be found growing in mats over the floodplain forest of the Potomac.

I have yet to see wintercreeper climb up the stems of winged burning-bush, but it would be fitting ecological fable—one invasive taking out the other. Let’s take them both out but leave the wahoo, the strawberry bush, and the native flora of our Potomac forests. 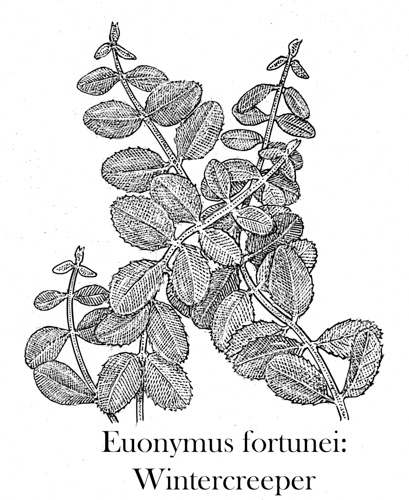