Of the many uses of plants, enhancing the privacy of one’s property by growing a border of thick impenetrable trees or shrubs is a common phenomenon, especially in the modern suburb. A favorite planting of local landscapers is Leyland Cypress, a non-native that is cheap, grows quickly, and is evergreen—and therefore is widely used (even if flimsy, prone to being blown onto roofs in heavy snowstorms, or to dieback where water collects). You can understand the basic rationale: why erect an ugly expensive chain link fence to demarcate your property line when, with a few years of patience, a row of plants, especially if they are evergreen, gives you the seclusion you are looking for? Another addition to border botanicals is non-native yew, or boxwood, which also forms a green “hedge” against peeping Toms and Tanyas.

But among the worst choices for a boundary planting is privet. Privet is a genus of shrubs and small trees in the Olive family (Oleaceae) that also contains another non-native hedge favorite, Forsythia. Forsythia, like privet, is highly invasive but, unlike privet, captivates us with its beautiful flowers and willowy branches. Privet is certainly among the uglier plants in our flora: its blunt-tipped leaves give way to white flower clusters at the tips of branches that give off the odor of old socks. The fruits are shiny blackish-blue berries containing one-to-four seeds, and like the conspicuous fleshy fruits of a number of invasive trees and shrubs, they are food for birds. Robins and other thrushes spread the seeds from the yard’s edge into the forests. Privets germinate well in disturbed soils on the edges of forests or even in the forest interior.

Of the 50 species in the privet genus (Ligustrum), eight are found in our area, all from somewhere else, as indicated by the specific epithets of Ligustrums named sinense, japonicum, or amurense, the last species referring to the Amur region along the border of Russia and China, home to the Amur (Siberian) tiger. L. vulgare, the common privet (vulgare or vulgaris meaning common in Latin) is from southern Europe; it was planted in Elizabethan gardens in the time of Shakespeare, became a favorite edge demarcation in English gardens, and is often featured in hedgerows. In fact, the name privet became associated with the word privacy.

In my walks through our native forests, I come upon privet now and then. If the invader is small in stature, say less than two feet high, I try to pull it out. Further south from us, the invasion of privet into native forests, particularly L. sinense pictured here, has become a major problem for park managers, crowding out native plants and affecting not only their growth but survival. If that is not enough reason to carry a pair of tree pruners in your forest forays, here is another: the fruits and leaves of this plant are full of toxic terpenoid glycosides that can fatally poison humans as well as our beloved dogs if ingested.

Seeking seclusion through plantings fulfills a landscaping urge and an often burning desire to be left alone. For those who choose to maximize their privacy and still want to stay with native plants, the choice is limited. Aside from Eastern red cedar—also known as Eastern juniper—or Virginia pine, we have very few native trees and shrubs that are truly evergreen and thus block the view year-round. Even bald cypress trees, the most graceful tree we can grow, is a conifer that drops its needle leaves in winter.
So let me make a recommendation that solves the problem: a native, evergreen shrub that forms a dense hedge, has shiny attractive foliage, and produces fascinating fleshy red and orange fruits beloved by songbirds: Strawberry bush. And with its patriotic specific epithet, Euonymus americanus, what more can you ask for? A dense row of strawberry bush offers food for migratory songbirds and shelter for residents in the snows of winter and the breeding season. Within a few years, a row of seedlings planted in the fall becomes a dense, tall hedge. Strawberry bush shows that privatization is possible, even while being ecologically correct. 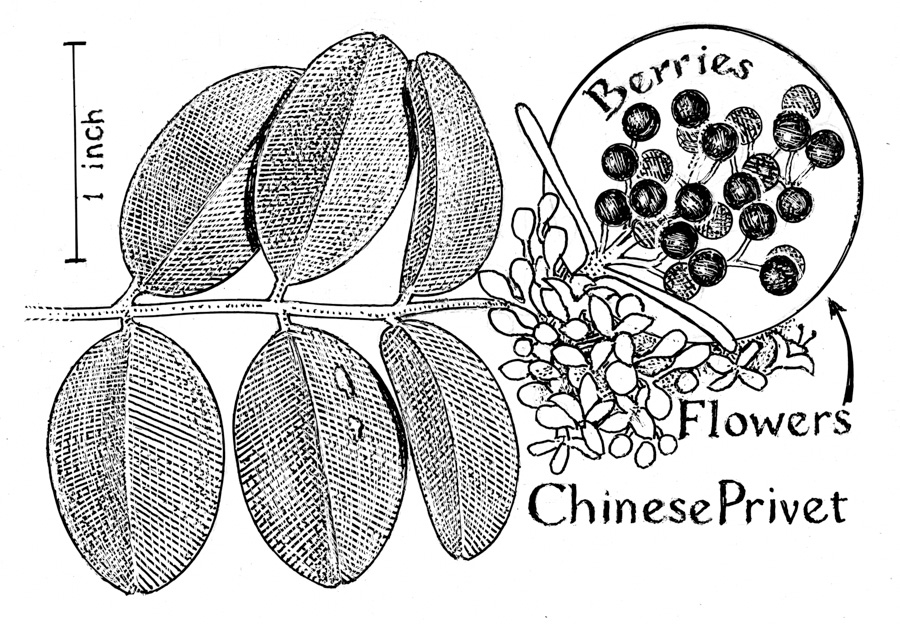