It’s early June and in our area the fragrance of honeysuckle clings to the roadsides. When I was a child growing up in coastal New Jersey, my first memory of the natural world was the wild honeysuckle growing in an abandoned lot across the street. We would gather at dusk, when the aroma of honeysuckle was most powerful, and pick the alternating yellow and white blossoms. Biting into the spur at the end of the flower, we became nectar robbers, stealing the reward that nature (evolution) had offered the actual pollinators.

Little did I know that our nectar-robbing gang was plundering an exotic species—Lonicera japonica—or Japanese honeysuckle. In Cabin John, if you’re on the sidewalk along Seven Locks Road in early June, it is impossible to avoid the inviting odor of this invader, even with a makeshift Covid-19 mask over your nose. We have nine species of honeysuckle in our area, only one of them native (see Village News, September 2013). The rest are all introduced, and a few of those are botanical terrors.

The Japanese species is a sun-worshipper. You will only find it along the roadside or at the edge of abandoned lawn, often growing next to Common Privet, another invader from Europe, also flowering right now but not as fragrant. But the worst species of the lot is our subject, the Tatarian Honeysuckle. This aggressive, vibrant shrub or small tree is native to Siberia and other parts of East Asia. It is safe to say that there may well be more individual plants of Tatarian Honeysuckle in North America than back in the old country.

Like many of our invasive plants, Tatarian Honeysuckle was introduced to the U.S. as an intriguing ornamental; that happened way back in 1752, so I suppose it has deeper roots in the country than most of us. This honeysuckle’s vigorous growth of the species would have made any novice gardeners back in the colonial era proud of their efforts. But this invasive has subsequently taken local nature hostage across the entire continental United States, reaching all the way to Alaska. The Tatarian Honeysuckle grows in any disturbed patch of land; it reaches these new germination sites easily as numerous birds and mammals ingest its berries and spread the seeds.

Unlike the Japanese honeysuckle, alternating with white and yellow flowers, the Tatarian corollas range from white, to pink, to crimson. Tubular in shape, they are attractive. But for our native plants, this is all a deception: they are experiencing one stage or another of Death by Honeysuckle. Unlike the Japanese version that stakes out territory along sidewalks, the Tatarian can tolerate dense shade. So it roams into the forest interior, spreads thanks to the native fruit-eating fauna, and eventually shades out all that grows under it. No more forest recruitment under Tatarian rule.

There is always controversy over invasive plants, and one can almost hear the refrain from live-and-let-live ecologists, “There are good plants among exotics, too.”

At one of the birding hotspots for spring migrants in the D.C. area—Monticello Park near Ridge Road in Alexandria, VA—birders are divided. When a campaign was underway to remove the English ivy, Periwinkle, and other invasive plants along the warbler-rich hillsides, there was also a plan to rip out the Tatarian Honeysuckle lining the stream that is the lifeblood of this park. The stream is very shallow and forms pools, and in the spring, warblers, orioles, grosbeaks, vireos, and thrushes drop down from the canopy to take their daily bath—sometimes probably more than once a day for a few individuals. In the spring, we joke that in many birding hotspots like Rock Creek Park, there is a rash of Birder’s Neck Disorder—a condition brought about by craning one’s neck for hours at a time to examine the treetops for that singing Blackburnian or Bay-breasted warbler. Or was it a Cape May?

Those species that prefer the upper canopy grace us with their presence as they rather boldly take their bath in the Monticello streambed. Like Land Rovers converging on the lion pride coming in for a drink around a waterhole, the avid birders descend around the bathers and gape in awe or click away. I am one of the wicked. Some aficionados even stake out a particular puddle that is known to be a favorite and sit all morning in front of their cannon-like telephoto lenses on their tripods waiting for the perfect shot.

The Tatarian Honeysuckle is perhaps the most common shrub along the stream (for a complete list of plants here see the inventory on http://www.mpnature.com/). Those who care for birds believe that the presence of the invasive honeysuckle actually offers splendid perches for post-bath preening for the birds (not the birders) and a staging platform to await their turn at the preferred pool while another is taking the waters. Some land-use managers point to the presence of these robust invasive shrubs as protecting the banks from erosion that might otherwise soil the bathing pools with silt after heavy rains. From this perspective, pulling out these Tatarians or cutting them down would likely do more harm than good. My view is that it might shake things up for a year or two, but other native shrubs—spicebush, dogwood, burning-bush, and others would take its role. The birds wouldn’t care.

Thinking more broadly, we can add the Tatarian Honeysuckle to our list of Ten Most Wanted for Removal List. If we could only tend our natural areas like we weed and prune our front yard gardens, we would restore the ecological imbalance. A chainsaw applied by a knowledgeable invasive species manager could perform wonders in a weekend. 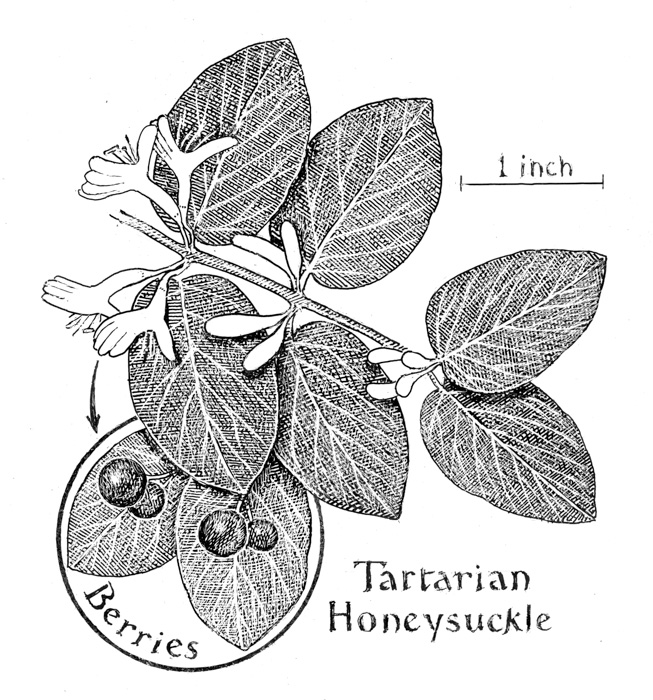