Staying indoors much of these past two months has probably led many lockdowners to confront one of the most foul-smelling creatures to invade the United States in the past fifty years: the brown marmorated stink bug. You have seen them on your sofas and curtains. Maybe one landed on your head while sitting in your favorite chair, you crushed it inadvertently with your hand, and it emitted a defensive odor that would make you think twice before disturbing another one. Originally from Asia and first discovered in Pennsylvania in 1996, this stink bug is now ubiquitous—present in 44 states.

Not just invasive bugs, but invasive plants can smell foul, too. Growing in abundance along the towpath is last month’s stinker, the garlic mustard. Perhaps the worst smelling among the local flora is the perfectly named dead-nettle, a mint that reeks of dead animal when the leaves are crushed. You can find it in your garden or in any grass median along a sidewalk. In fact, many mints, one of the largest families of flowering plants with over 7000 species, smell rather “off.” Sure, the mint family contains lovely cultivated plants like lavender, thyme, and lemon-balm, but most wild mints have a deep musky smell, stemming from chemicals called secondary compounds that likely evolved to avoid a plant’s greatest threat—some large-mouthed four-legged herbivore or a sap-sucking insect. Native Americans took advantage of this evolutionary adaptation of plants: they learned to extract oil of pennyroyal, a native mint, to repel biting insects. And then of course, there is catnip, another mint, that needs no introduction.

But there are also a multitude of more insidious invasive plants that we are willing to tolerate, or even cherish, because to us they smell divine. At perhaps the top of the list of favorable impressions is the multi-flora rose (Rosa multiflora). Originally brought to the U.S. from eastern Asia, it is also called the Japanese rose or, as the Latin name implies, the many-flowered rose. It was considered a valued ornamental because its flowers are larger and more abundant than the native roses, and it offered value when planted in hedgerows, as fodder for livestock, or to prevent soil erosion.

Outside of the fragrant, or winter, honeysuckle (Lonicera fragrantissima) covered in a Local Nature column in September 2013, there is no other invasive plant with an aroma as intoxicating to inhale as the perfume of multi-flora rose. The experience is most profound, I’ve found, when riding my bike along country roads on the way to Poolesville or Sugarloaf Mountain. This scrambling rosebush species has taken a liking to road edges where there is enough sun and moisture to meet its needs.

So what’s there to dislike about a plant species that smells like one we might recommend for lining the passageway to heaven? Especially one that is more fragrant than virtually our entire native flora and even more powerfully scented than our four native wild-rose species: low pasture rose, pasture rose, swamp rose, and climbing rose?

The answer is that a multi-flora rose is truly invasive: it doesn’t behave like a valued guest but takes over where it is not welcome. The understory of our native forests is filling up with this species, crowding out our beautiful native wildflowers and shrubs. There are sections of forest along the towpath where multi-flora rose grows so thick it outnumbers all other woody plants. Hiking in shorts would be a bad idea, even if there were no poison ivy around.

Birds and mammals eat the rose hips and spread the seeds. Although clearly the species is a food source, it prevents even more nutritious plants like oak and hickory trees, as well as rare and exquisite vegetation like spring ephemerals, from getting a start. And the only sure way to keep this plant in check is to dig it out by the roots. As with many other rose species, there are downward curved thorns along the stems and branches to dissuade you from attempting to restore the ecological balance.

If we ever organize a Cabin John Invasive Weed Removal Brigade, the multi-flora rose I think should be among the first targets for banishment, along with the plants this column introduced this year: fig buttercup, garlic mustard, and its neighbor, Japanese knotweed. We should welcome human immigrants to our shores—they enrich our nation. The same cannot be said for invasive plants that are allowed to destroy the ecological balance and diversity of our flora. 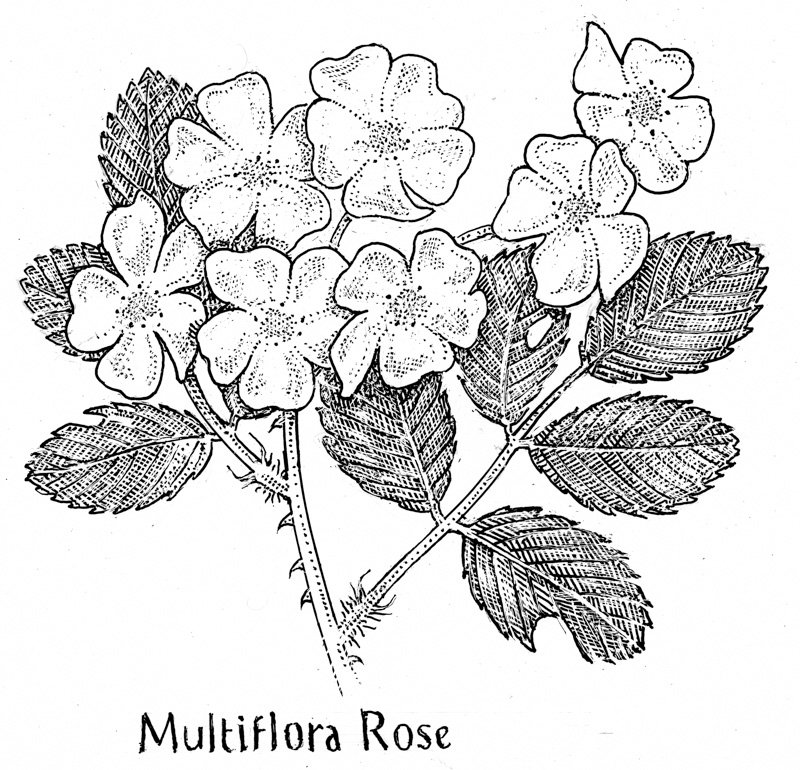