In late December 2019, I suggested to Trudy Nicholson, our supremely talented illustrator, that we organize the monthly Local Nature column around a specific theme for that calendar year. For 2020, the unifying thread would be invasive species that can be found inhabiting and spreading along the towpath or the Cabin John Creek Trail. We had intended to feature mostly invasive plants—like garlic mustard—and a few animals, like starlings, the subject of the inaugural entry for January 2020. What seemed like a puzzling choice of topic categories at first, now seems prescient as a new invasive, the novel coronavirus, has spread globally.

One barely mentioned aspect of life in the past 45 days is that almost everyone has at least glanced at a graph or two that tracks the spread of the new coronavirus. Others have taken the next step to increase their scientific knowledge: exploring the logic behind “flattening the curve,” or for the more ambitious, the basics of population ecology and the distinction we hear daily between “exponential growth” and linear growth. It is only a matter of time before “zoonotic spillover”—here defined as the transmission of a pathogen from a vertebrate animal to a human—becomes a term that children learn about in school and then explain to their parents. For those of us who practice wildlife science for a living, interpreting graphs and weighing assumptions underpinning complex modeling of wildlife populations or infectious wildlife diseases, these activities are part of the routine. For epidemiologists, too, the workflow consists of gathering data, erecting preliminary hypotheses, testing, gathering more data, and refining models. These are the well-established steps to inch closer to explaining what is happening now in the simplest way possible, and most importantly, what will likely happen next. Developing a vaccine and antivirals to treat this novel, invasive coronavirus species is done by the same scientific method used by other branches of science, and now accelerated by modern technology like artificial intelligence. In the case now before us there are clear life and death outcomes for individuals, societies, and economies.

In the midst of the current crisis, we are in the hands of epidemiologists and immunologists for scientific knowledge. May they do their work quickly and successfully. But what can wildlife biologists contribute to the conversation about prevention of the next zoonotic spillover, when yet another deadly virus jumps from a non-human species to humans? A lot, but first some background. We know that the closely related SARS virus (Severe Acute Respiratory Syndrome; COVID-19’s extended name is SARS-CoV-2)—the outbreak of which originated in 2003 in China—occurs naturally in bats, though bats are not themselves affected by the SARS virus. The most logical vector of the novel coronavirus that causes COVID-19 is the horseshoe bat, a member of the bat order Chiroptera. Horseshoe bats roost in the limestone caves common in Hubei province, and bats are eaten by the local populace. It is speculated that live bats captured from caves were caged and transported to markets. These cages would then be stacked on top of cages of other wild species consumed by the local population. At the top of that menu is the scaly anteater, or pangolin, one of the most endangered mammals in the world. Pangolins are a delicacy and fetch high prices for their dietary and reputed medicinal value. When mammals are stressed, such as when bats are captured and placed in cages being taken to market or at the market site, they, like all mammals, shed the viruses they carry via urine and feces. These excreted substances containing the live virus likely infected the more commonly eaten species (such as pangolins) which were kept in cages, alive, beneath the bat cages.

A simple solution to reducing the chances for zoonotic spillovers is to stop people from collecting or eating bats. This can be accomplished by closing all wildlife markets where consumers can indulge in eating not just bats, but everything from primates to pangolins. We don’t know what virus will jump next from one mammal to another. The Chinese government has pledged to close these markets, a challenging but important step.

But I recommend another solution to the problem, offered as a bat ecologist who has spent some time in bat caves. My advice: stay out of bat caves, or better yet, keep people out of them as we are doing in the U.S., where a fungal infection called white nose syndrome is wiping out whole colonies of bats. This fungus is spread from one cave to the next, perhaps by unwitting spelunkers and naturalists. In China, bat hunters often go into caves to catch bats for the wildlife markets. Chinese bat ecologists (of which there are many) could work with the Chinese authorities to locate prominent bat caves and station guards and install security cameras to prevent trespassers from entering.

One could pose the question: why protect bats at all, given what they may carry? Why not just poison the caves? In defense of bats, they do much more good in the world than bad: controlling mosquito and crop pest populations, pollinating flowers, and dispersing fruits. Bats are also the engineers of tropical forests. We just need to leave them alone and protect their habitats.

One can find reasons why these zoonotic spillovers are likely to continue. If little or nothing is done to remove incentives that bring people more and more in contact with creatures of the forest, then this is our new normal. We must address some of the drivers of this behavior like overpopulation, extreme poverty, and profiteering by those exploiting tropical rainforests. One root cause that largely goes unspoken, offered by a colleague who leads an organization to promote the ethical treatment of wildlife: “The whole of humanity has been brought to its knees because of cruelty to animals. Think about that.”

And now on to the original topic of this monthly edition, the garlic mustard plant, which is an invasive that, unlike a coronavirus, can easily be controlled, especially along the Potomac towpath where it proliferates in abundance. This invasive member of the mustard family hails from Europe. It is so named because when you crush the young leaves, it smells like garlic. Even the scientific name Alliaria petiolata makes this reference, as Allium is the genus of garlic. Garlic mustard was introduced to North America by European colonists in the 1800s for medicinal purposes and as a food flavoring. Among the local native herbivores, the deer along the towpath will eat almost anything, but won’t touch garlic mustard. Nor will insect herbivores that feed on wild native mustards.

In a few days you will see the white, four-petaled garlic mustard flowers on tall spikes. In some places they choke out our wonderful spring wildflowers, just like the invasive fig buttercup featured in last month’s column. Before you next go out, learn to recognize the plant from this accompanying illustration or Google its photo. And when you see the plant growing in clumps, pull the plants out by the roots. This is one invasion we can stop with low-tech weeding. 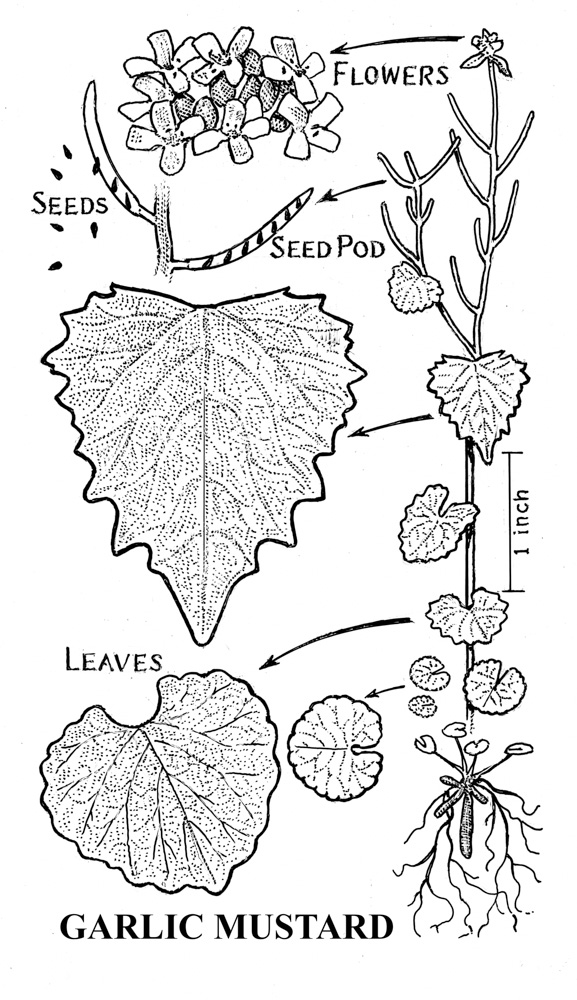