The welcome mat of early spring in our area carpets the ground in golden-yellow buttercups. Great writers took note. Wordsworth waxed on about their spring beauty; D. H. Lawrence wove them into his epic, Sons and Lovers. Who doesn’t love the cheerful countenance of brilliant yellow buttercups against fresh green leaves, a botanical punctuation mark to the end of a dreary gray February?

For Europeans, the buttercup is a symbol of the reawakening of life. But for those of us residing in the former colonies, the most common buttercup species are, surprisingly,  invaders that threaten to smother our wealth of early spring wildflowers. If you want some local evidence, take a stroll in early March along the Cabin John Creek Trail. What many CJ residents don’t know is that we live next to one of the finest paths in Montgomery County for viewing and conserving native wildflowers, some of which are endangered. Bloodroot, Spring Beauty, Dutchman’s breeches, violets of several species and colors, early Saxifrage, wild ginger, Bluets, Bluebells, Golden Alexander—the list goes on.

But in the flat, damp places bordering the creek, a dense mat of an insidious invasive threatens our native wildflowers. It is fittingly named false celandine, but it is also known as the fig buttercup.

There are 19 species in the genus of buttercup (Ranunculus) found in the DC-Maryland-Virginia flora; 12 are native. It is the other seven species, however, that pose danger. By far the worst is the fig buttercup. Present in the eastern U.S. since the 1880s and more recently a favorite ornamental among gardeners, fig buttercup is now considered invasive in many states in the eastern U.S. and on the West Coast as well. In the Cabin John area specifically, fig buttercup was barely a problem 26 years ago when I first moved to our neighborhood and began walking along Cabin John Creek; it only reached alarming coverage about a decade ago. Even in my own backyard, a visiting landscaper—who happened to be my German brother-in-law—who probably knew how charming the fig buttercup was back home, planted bunches of it around my backyard from a single patch on our property. Soon thereafter I decided to create a native plant botanical garden, decidedly counter to the well-being of the fig buttercups in my midst. It has taken years of diligent weeding and a mixture of vinegar, dishwashing detergent, salt, and water to send the fig buttercups into retreat. Each year this has been my early spring struggle, but the invader is now under control. If I were to let up for one year, however, they would return, spreading via their underground tubers and runners and swamping my carpet of native Virginia bluebells and wild ginger.

What has saved the Cabin John Creek Trail so far is that the fig buttercup struggles to persist in steep or even sloping terrain, so the native wildflowers that cling to the rocky upland sections are safe for now. But native wildflower species that call the terrace next to the creek their home are in grave danger.

Mid-March through late April is the time of blooming for what makes our region spectacular, the early spring wildflowers known as spring ephemerals. Although perennial plants, they emerge every spring along the forest floor when the forest is more like a prairie in the levels of light that reach the ground. While the trees are still leafless and the unfiltered sun’s rays warm the earth, these magnificent wildflowers flourish, often in vast carpets of Dutchman’s breeches, trout lilies, bellwort, wild ginger, and Spring Beauty. Pollinated typically by hardy bees and flies, they quickly live out their short lives, set seed, and have their seeds carried off by the most improbable of dispersers—ants. The ants are attracted to the tiny fat deposits attached to the seeds, which they carry back to their underground lairs and eat. The abundance and variety of ant-dispersed plants makes our flora nearly unique in the world.

If you don’t hike along the creek from early March to April’s end, you will not see this great flowering because the whole life strategy of these ephemerals is to do their business in early spring and then die back until the following year. The fig buttercup largely dies back by late-April as well so the time to eradicate it is now.

So what can be done?

A small army of adult volunteers, perhaps combined with Boy Scout and Girl Scout troops, along with a few knowledgeable botanical chaperons from the Maryland Parks Department, could probably restore our creek flora in a week of weeding. But if you don’t dig out the tubers of the plant, this effort will be in vain. Alternatively, a one-time application of an herbicide in spots where fig celandine forms dense mats is probably the most effective cure.

What can gardeners do in their backyards? Learn to identify the leaves of fig buttercup when they first emerge in late February. Where they are thick, and especially mixed in with English ivy and False Periwinkle, which are also invasives, you can spray with a mixture of vinegar, salt, dishwashing detergent, and water when there is a three-day stretch of sunny weather. You can also cover them with a plastic tarp to prevent sunlight from striking the leaves. Presto, the fig buttercup turns brown and dies. Now you can replant with lovely native ground-cover plants: marsh marigold, wild ginger, native stonecrop, and instead of Japanese spurge, try Allegheny spurge.

There is another reason to rid ourselves of fig buttercup besides allowing native plants to flourish. The leaves may resemble fig leaves, thus the genus name Ficaria, but the plant is quite poisonous. This is a common feature of the Buttercup family worldwide, which includes monkshood and some other of the most toxic plants known to our species.

To some readers, this year’s series of columns on invasive plants and animals may seem like a monthly installment of bad news after more bad news—how Cabin John is being invaded by alien plants rather than celebrating what we have. But a future bereft of spring beauty is precisely the reason to call attention to the dangers now. We have something spectacular on our doorstep, and future residents will never know the glory of early spring wildflower walks if we let the false celandine crawl all over them.

And a promise: Next year’s theme will focus on creating your own national park in a corner of your yard by planting native species. Each month we will profile a wonderful species that adds beauty and is part of the native Maryland ecosystem. For now, let’s be on alert. Fig buttercup is our flora’s equivalent of the coronavirus. 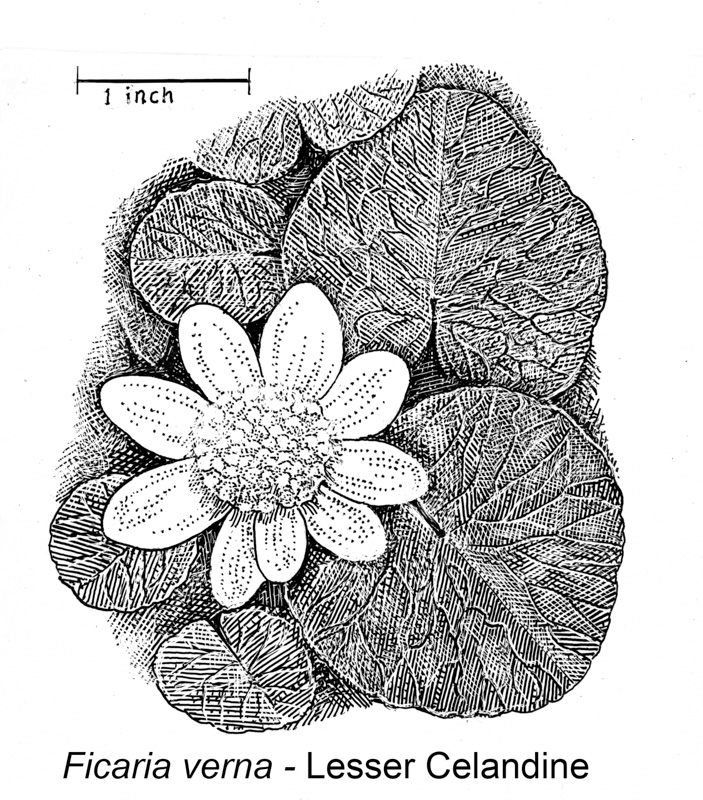