Identifying trees from a distance is always a tough call even for veteran naturalists. So, when you can snap up a field tip that always holds true and allows you to proudly name a tree species from the car window or across a hillside, it’s a nugget of natural history knowledge to treasure. My first nugget came from a professor at the University of Washington who taught me how to spot a Western Hemlock, a common needle-bearing evergreen of the Pacific Northwest. He pointed at the way the tip of this tall conifer bent over—the Western Hemlock’s “Droopy Toopee,” he called it. Try it next time as a surefire way to distinguish the Western Hemlock standing in mixed forests filled with spruces, true firs, douglas firs, yews, cedars, and pines, the other needle-bearing trees found along the nation’s west coast.

Interestingly, the Eastern and Carolina Hemlock species differ from their Western relative in that their “toopees” stand straight up, at attention. But, if they mirrored the current state of their species’ health, they would be at half-mast or lower. For about 70 years now, the Hemlock Woolly Adelgid (HWA), an invasive member of the sucking bug, or true bug, family (the Hemiptera), has infested stands of Eastern Hemlocks in the eastern deciduous forests of the U.S. The aphid-like insect is pictured here. The infestation now spans an area from northern Georgia to Nova Scotia, affecting 90% of the North American range of the Eastern Hemlock.

Oddly, HWA has been present in the western United States for thousands of years, where it causes only minor damage to the native Western Hemlock. Natural predators and parasitic wasps keep HWA in check there, aided by the Western Hemlock’s considerable power of resistance to infection. HWA was introduced to eastern North America from Japan and was first discovered south of us, near Richmond, Virginia. The HWA is native to Japan and East Asia; it sucks the sap from native hemlocks and spruce species there but does not cause mortality.

In the eastern United States and southern Canada, the HWA is out to get every hemlock standing. The adult bug is less than a millimeter long and oval in body shape—hardly imposing. But its mouth parts, four thin, thread-like structures that are packed together, measure three times the length of the body. When this hypodermic-like structure pierces the plant’s tissues, it begins to suck out the sap to gain its meal and sometimes injects a toxin in the process. Perhaps the toxin helps to keep the stored reserves flowing or inhibits the hemlock’s capacity to fight back with its own chemical defense. If heavily infested, the hemlock needles turn from their typical healthy dark green to gray-green. Now desiccated, the hemlocks begin shedding their needles. Death usually follows four to ten years after being infected. Even trees that somehow cling to existence after having their juices sucked out remain in poor health and often die of secondary causes.

Interestingly, there are several healthy-looking Eastern Hemlocks in our Cabin John neighborhood that were planted as ornamentals along property edges. Those I can reach as yet show none of the telltale signs of infestation: bunches of tiny white woolly balls at the juncture of the needles—HWA egg cases. Making the HWA even more difficult to control is that it reproduces asexually and can have two generations per year. Each individual can lay up to 300 eggs in the woolly egg sacs. Larvae emerge in spring and are spread around by wind or on the feet of birds and mammals. The nymph, the stage after the larval period, stays put and lives on a single tree.

Let’s now scale up from the single tree to the forest so, to use that tired but apt metaphor, we don’t miss seeing the forest for the trees. A number of potential cures have been tried to halt the destruction of the Eastern and Carolina Hemlock, but none seem to be working well. These include introducing native pathogens and parasitoids from Japan and introducing the black lady beetle, which is native to the western U.S. and Canada and preys exclusively on the eggs of various Woolly Adelgids. Treating individual trees is possible but costly and hard to achieve if the tree is quite tall.

A recent president once said derisively, “If you have seen one redwood, you have seen them all.” That lack of appreciation for native conifers notwithstanding, if we apply the same logic to the less imposing Eastern Hemlock, and they were to disappear from our forests, would they be missed, and would their place simply be taken by some other tree? As it turns out, Eastern Hemlocks, an abundant species in native New England forests, are vital to the ecological health of that system. Hemlocks prevent soil erosion, provide food for deer and other wildlife, and offer shelter for deer in winter. Elsewhere, hemlocks often line riverbanks and create a microclimate favored by newts and salamanders, while providing nesting ground for birds and cool water in the streams below, which is essential for brook trout to thrive.

When the eminent ecologist Paul Ehrlich famously coined the airplane rivet metaphor to answer critics about the overall effect of individual species extinctions, his argument was that an airplane could possibly lose a rivet here and there, but we really don’t know which rivet popping out of the wing could lead to a cascade of rivets popping and the wing falling off. The loss of Eastern Hemlocks to the HWA could have a cascading effect on what ecologists call the structure and functioning of the Eastern deciduous forest ecosystem. The next time you walk in a forest covered in hemlock, see if you can imagine the rivets popping. And look at the tips of the trees—they may be drooping under the weight of extinction.

Perhaps it will be possible to use new genetic techniques to transplant the genes that code for HWA resistance in Western Hemlocks or Asian species of hemlocks into hemlock seedlings and plant these HWA-resistant strains. Until then, there is little to do but send in armies of lady beetles that at least slow down the demise of the hemlock. 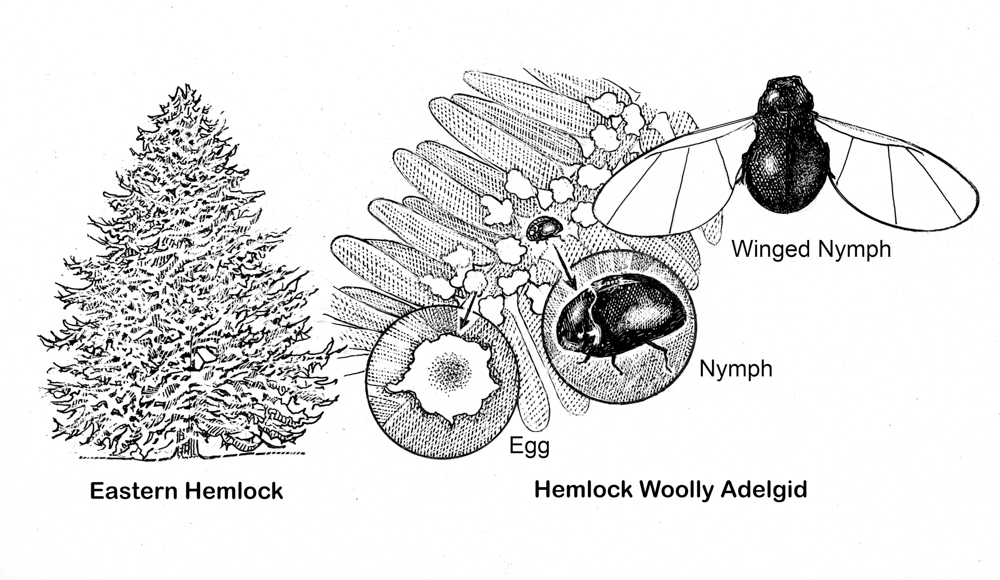