For 2020, Trudy Nicholson and I are going to add a new dimension to the Local Nature column by sticking with a single theme that will run through each of the year’s articles. This year we will focus on species that are considered by biologists as invasive and, in a few cases, a menace to our native ecosystems here in Cabin John. An invasive species is one that is not native to a specific location and that has a tendency to damage the environment, the economy, human health, or all three. Non-native plants and animals are found on almost every continent; though in most cases they do not become established or spread far and wide. But a few arrivals—some released from captivity (Burmese pythons in the Everglades), others escaped from gardens (privet and periwinkle), or others stowed away in wooden packing material or crates transported by plane or ship (the emerald ash borer, for example, a beetle that kills native ash trees)—have resulted in ecological mayhem. Cause for the most alarm occurs when non-natives arrive, colonize, and spread across remote islands. For example, the Galapagos archipelago suffers from goats, cats, and rats introduced by settlers from the mainland. The goats eat the vegetation favored by tortoises; the cats kill native lizards and mammals; and rats eat bird eggs. All are very difficult to eradicate. The island of Guam is threatened by the brown tree snake, which eats native birds, and a fortune has been spent to remove it. And then there are the Hawaiian Islands where, you name it, it’s likely to be an invasive plant or animal.  And Hawaiian wildlife officers are on alert for brown tree snakes hitchhiking in the wheel well of planes from Guam. Many exotic species do little damage to the local ecological fabric on islands, but others rend it asunder, especially when the native species did not evolve with introduced large herbivores, predators, and certain diseases.

In the Washington, DC area, we of course live on the mainland, so our ecological situation is less fragile than that of remote archipelagos. But even on large continents, as we shall learn over the next year, entire species can be wiped out by a new organism. Ecologists rank the threats posed by exotic invasive species as the number two cause of species extinction, far behind number one, habitat conversion, but still significant.

As usual, Trudy will bring her immense artistic talents to interpreting these unwanted neighbors. In these superb illustrations, you will see a paradox: that even the worst invaders to our ecosystem are often physically quite attractive species.

A Murmuration of Starlings

When animals of the same species aggregate in large numbers, it sparks the poetic side of human nature. A scold of jays, a conspiracy of ravens, a murder of crows: well, maybe the dark poetic side. Fortunately, there is also a charm of finches, a bouquet of pheasants, and an exaltation of larks to balance the picture. And perhaps the most poetic of all is a murmuration of starlings (murmuration refers to the act of murmuring).

European starlings are ubiquitous in our area and exceed 200 million birds in the U.S. as a whole. You can’t miss them: a plump, feisty, yellow-beaked bird about the size of an American robin, covered in purple and green iridescent feathers, with a splattering of white spots in the breeding season. Most striking is their behavior. Starlings are street fighters, and gangs of them push away other native birds from winter feeders. Even worse, in the breeding season, starlings prefer to make their nests in tree cavities, a feature in short supply in nature. In fact, ornithologists attribute aggressive starlings bent on taking over tree holes to a decline in the gorgeous red-headed woodpecker, bluebirds, and purple martins. Starlings also raid grain crops, and reduce milk production on dairy farms by stealing grain in cattle feed. Large murmurations at airports pose the serious threat of flying into jet engines (causing a major air crash in 1960 in Boston, killing 62 people).

As their name suggests, European starlings are native to Europe, so what crazy person would ever think of bringing them to U.S. shores? We can indirectly blame Shakespeare. In Henry IV, Part 1, Hotspur is fighting King Henry and seeks ways to upset the monarch. He dreams up teaching a starling to repeat the name of one of the King’s enemies,  “Mortimer,” over and over. (Starlings are, in fact, skilled mimics.)

In 1890, a German immigrant, who was a bird and Shakespeare enthusiast, thought that it would be a brilliant idea to introduce all of the 60+ bird species mentioned by the Bard to the U.S. On a cold winter day, Eugene Schieffelin released 60 starlings into New York’s Central Park. Unfortunately, the frigid weather did not knock them off. They took root, and now they are one of the most common birds in North America.

There is a hidden element in this story worthy of greater illumination: Schieffelin was a member of the American Acclimatization Society, whose mission was to introduce plants and animals from the Old World to offer comfort and familiarity to emigrants who settled here. This notion of bringing familiar plants and animals to new lands has been a propensity of all colonists, much to the detriment of native species. New Zealand is perhaps the most extreme example: Maori and western colonists introduced mammal species—marsupials, weasels and their relatives, and rodents—that never occurred there, which has led to extinctions or severe population declines of some of the most interesting animals on Earth. These include the world’s only flightless parrot called the Kakapo, the kiwi, and the moa, a 500 lb. flightless bird. Aside from a few bat species, mammals were not native to these islands.

Starlings and their relatives in their native habitats are glorious birds, especially the members of the family in tropical parts of Africa and Asia. One has to look no further than the Splendid Starling or Superb Starling of East Africa, with their dazzling plumage, or the charismatic Talking Myna of Asia. But put them in a place where they did not evolve, say Florida or Texas, and ecologists beware: trouble lies ahead.

As I write this, starlings in my backyard are gathering in a tree. How many red-headed woodpeckers did they usurp from nesting Cabin John? How many bluebirds and tree swallows lost the breeding cavities to these pushy birds? Shakespeare, why couldn’t you have stuck to writing about the gentle blackbird singing in the dead of night or the nightingale? 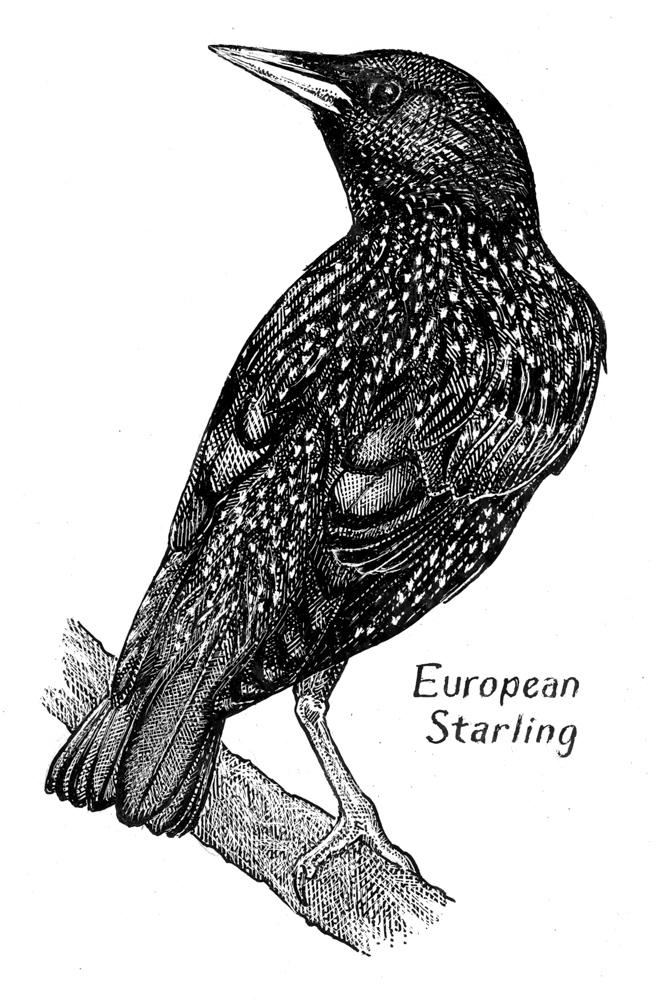