Naturalists at the edge of a forest are like Labrador Retrievers on a riverbank: nothing can stop us from plunging in. For the naturalist, each entry is bound to turn up something new and exciting, and the rewards greatly outweigh any possible risk. For those scared of the great woods, however, there is always something to fear. In the American pioneer era, it was the bogeyman or wolves, but today, from the Amazon rainforest to the Potomac, it is more often the fear of snakes. Across much of North America over the last two decades, though, another threat has joined the list of reasons that may come to mind to shun the woods—blood-sucking ticks. Ticks have been with us forever, but it is the spread of Lyme disease transmitted by several species that has perhaps more than any other creature, fantasized or real, made the woods a place to avoid rather than explore.

Anyone who has contracted Lyme disease knows that it is nothing to make light of, although if caught early, a treatment of Doxycycline cures the problem. While the black-legged tick, or deer tick, infects humans, white-tailed deer and rodents carry the disease. So the spread of both deer and rodents, fueled by the absence or decline of natural predators to control their populations, is another reason why Lyme is so prevalent.

Scientists are working on a vaccine to prevent Lyme disease, the fastest spreading vector-borne disease in the U.S. But that is likely years away. In the near term, can we look to nature for a possible preventative, perhaps one that Native Americans might have used? Is there particularly one to ward off adult deer ticks or the tiny juvenile form most active in spring and summer, and today, the major transmitters of Lyme? The juvenile ticks are the important vector because-at 2 mm-they are hard to spot in the human crevices in which they like to hide; adult ticks are much bigger, like the one pictured here, and also must remain attached to the skin for 46-48 hours for transmission of the bacterium that causes Lyme to occur.

Enter one of the most beautiful shrubs in our native flora, American beautyberry, known to the science world as Callicarpa americana. If you take a walk around the Cabin John neighborhood you might discover along a border edge a large sprawling shrub covered in clusters of bright purple berries. Most likely, this is Japanese beautyberry because it is widely cultivated here as an ornamental. But no need for the exotic Japanese variety when you can buy the native American version from local plant nurseries or from online providers who will ship them directly to you.

Go ahead and try a few of the purple berries. Sweet but a little astringent, they are edible and can be used for jam and jellies. Better to leave them for the woodpeckers, finches, mockingbirds, catbirds, wild turkeys, and any bird migrating south in fall, though. There is a third benefit to planting American beautyberry aside from the aesthetics of bright purple berries in October to brighten up the yard or as a way to feed our backyard birds—its leaves, stems, and bark serve as a top-notch tick repellent.

An old folk medicine to prevent ticks from latching on to you during a woodland stroll is to follow some simple steps to make a tick repellent cream. It can be produced from shaving of bark, stems, and leaves, diced, boiled in two cups of water, and allowed to simmer for 10 minutes. Then mix in some neem oil or other heavy oil and some beeswax to form a cream or paste. Put your pants inside your socks and apply the cream to them and to other parts where ticks might land. The treatment works for hours. I suppose you could probably just crush the leaves and rub them on your skin like  America’s first inhabitants may have. Pioneers knew to put the leaves of American beautyberry under the saddles of horses and mules to keep the bugs away.

The fear of ticks in spring and summer shouldn’t keep us out of the woods. But that sentiment may not be enough for those who have already contracted Lyme or those yet to suffer from it but who still maintain a deep fear and loathing of ticks. This condition even has its own name, entonophobia, one among the 650 “phobias” recorded to date, and not to be confused with entomophobia, the fear of insects. Ticks are not insects but are rather more closely related to spiders and scorpions, as adults have eight legs rather than six.

Of course, we could consider inviting opossums into our yards. They feast on ticks and keep the balance of nature in place. Otherwise, plant your own crop of beautyberry. 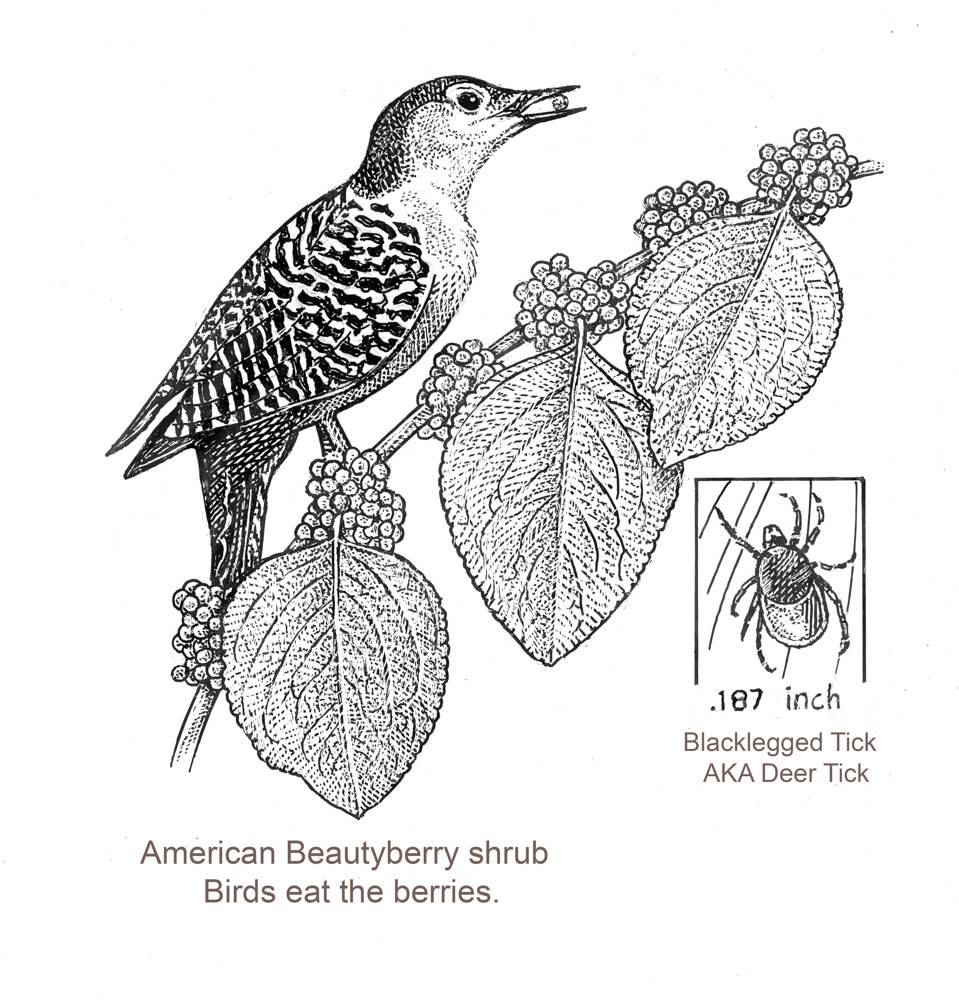