The first days of summer herald the flowering of one of the most exotic-looking plants in the world. It is a thin, fragile vine with quarter-sized chartreuse blossoms popping out along its stems that uses curlycue tendrils to climb over other plants. A novice botanist might mistake it as an escapee from a Panamanian or Costa Rican garden, its seeds somehow transported to Cabin John, rather than as a native to Maryland.

The amazingly showy flowers of the various passion flower species have made them a source of great interest to gardeners worldwide. Many hybrids also have been created using the other North American species, the larger and even more audacious-looking blue passion flower. Words fail to describe the floral exuberance of this genus with its corona (as it is called) of multiple layers and seemingly a zillion parts.

The name passion flower was applied to it by Christian missionaries who came upon these plants when they first reached South America in the 16th century. To them, ever on the lookout for symbolism in the New World, this wild looking plant suggested the death of Christ. The double row of colored filaments that is the corona signified in their eyes either the halo around Christ’s head or the crown of thorns — quite a difference. The five stamens (the male parts) and the three spreading styles (the female parts) with their flattened heads resembled in their minds the wounds and the nails of the cross. Finally, the tendrils of the vines suggested the whips used to flay Christ.

The vivid imaginations of these early missionaries and their religious bent precluded them from witnessing one of the most spectacular interactions between plants and animals in the secular realm. While we only have the two species of passion flower vines in North America, numerous species flourish along the equator, where their exuberant flowers are visited and pollinated by many kinds of hummingbirds, attracted to the bright red flowers. The hummingbirds follow the course of the spreading woody vines through the forest to the large showy flowers scattered here and there along the vines.

The interaction has been termed co-evolution by some scientists and co-adaptation by others. Co-evolution is a bit like the kids’ game of “you do this to me, I will do that to you” in response, provoking a continuous escalation where one species tries to one-up the other in order to leave more offspring for the next generation. Whatever term best applies, co-evolution or co-adaptation, it is a remarkable story that goes like this: If a bunch of caterpillars feast on its foliage, the loss of leaf tissue reduces the passion flower vine’s photosynthetic capacity and presumably the plant’s fitness, in this case its ability to produce many flowers and fruits, and reproduce.

To combat the female butterflies from successfully laying their eggs and being chewed up by caterpillars, the passion flower vine has erected an array of defense mechanisms. There is the obvious one: make the leaves unpalatable by producing chemicals that would be distasteful to the larvae. The larvae are unaffected by the toxins and instead sequester the compounds in their bodies to make them and the adult butterflies distasteful to birds. A number of Passiflora plants generate nectar glands, not just in the flowers, but in the stems of the plant; these attract ants that will serve as bodyguards, not only drinking the nectar but acting as leaf sheriffs, ridding the leaves of eggs that the female butterfly might lay on their surface. Some Passiflora vines disguise or vary the shapes of their leaves to make it harder for ovipositing females to find them.

Perhaps the most intricate and clever adaptation is that of plants which create fake tiny structures that are essentially mimetic eggs of the Heliconia. A passing female will see this leaf already occupied by these tiny orange appendages stuck to the leaf surface, and rather than add more eggs, increasing the chances they will all be detected by a predator, she moves on to an unoccupied leaf. The list of defense mechanisms goes on, but each time the plant comes up with a new strategy, the butterfly finds a way around it to some degree, or else there would be no more Heliconia butterflies.

If all this talk about chewing on plants has made you hungry there is more in store from the Passiflora. Anyone who has delighted in passion fruit, granadilla or maracuja, known to science as Passiflora edulis, knows how tasty these fruits are. Our local yellow passion flower is less endowed with these fruits, at least from the human standpoint, but birds eat them.

There is another local beauty that seeks out passion flower vines for other purposes, however. One of our most attractive butterflies, the Variagated fritillary, lays its eggs on the Passion flower vine. It’s a fast flying species and hard to approach, so much so that one witty lepidopterist gave it the genus name Euptoieta, meaning easily scared.

The early Christian missionaries saw one thing when it comes to passion flowers, ecologists and evolutionary biologists see another:  the marvelous interactions Passiflora has with the insects and birds around them. These interactions are worth examining closely, yet another source of wonder of the natural world, an arms race going on right in front of our eyes. 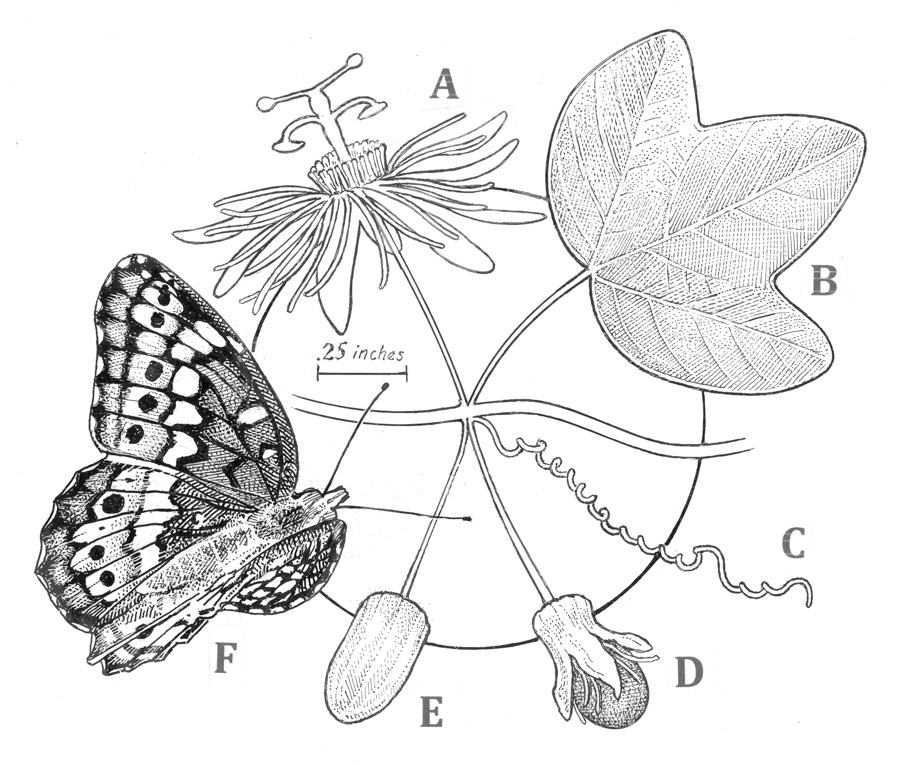