Looking down, the crow spied a skink.

It swooped from its branch in a blink.

The bird grabbed the skink’s tail

Forcing the lizard to bail

And leave the crow a wriggling link.

There is much to be admired about a fellow vertebrate as elegant as the blue-tailed skink. Or as crafty. In the Looks Department, this species, also known as the red-headed lizard, is slim and sleek, up to eight inches long, and sports flashy racing stripes on its body, five to be exact, that fade with age. If the brightly colored juveniles with their vivid blue tails survive to adulthood, they lose the blue pigmentation in the tail and their distinct stripes in favor of a uniform dull-brown coloration and a distinct red head.

Skinks are most visible when it is sunny, and this time of year, a favorite locus for skink-spotting is along the towpath by the little footbridge at Lock 8. Skinks are ectotherms, so they need the sun’s energy to warm up their bodies. And when they are warm, they hunt arthropods—spiders, insects—and even larger prey like newborn mice, frogs, and small lizards.

But what makes skinks so unusual is neither their coloration nor their feeding patterns, but a clever adaptation that is called in scientific parlance “anti-predator behavior”—or what we might call simply “how to avoid being the menu.” Skinks have a wide range of neighbors that would like to eat them, from fellow reptilians, such as snakes, to birds such as crows and hawks, and mammals that include everything from moles, shrews, opossums, skunks, raccoons, and, if allowed outside, house cats. But first these hunters have to catch one.

Skinks—at least a warmed-up skink— are incredibly quick and can dart away at the first sign of danger. But if caught by teeth, talons, or paws, they have another card to play: skinks can disconnect the links, or vertebrae in their tails, and leave behind the entire length or just a segment. The predator, now distracted, can eat or play with the twitching tail, while the skink runs for cover to hide, live another day, and over time regenerate what was left behind. And perhaps surprisingly, if the encounter with the predator is not too much of a mismatch, skinks can bite.

So why the blue tail found in the juvenile? One theory might be that the bright color is used to draw the attack of a predator away from the vital organs and focus instead on a dispensable tail. But its mammalian predators are color-blind, so……..More theory is needed.

There are just over 1500 species of skinks in the world, with only 15 species in North America and the vast majority in Africa, South and East Asia, and Australia. The most interesting group of skinks in the world, in my view, live on the island of New Caledonia, in the Coral Sea due east of Brisbane, and on the nearby archipelago of the Solomon Islands. The long, narrow island of New Caledonia, also known as Grand Terre, broke off from Australia about 60 million years ago and, as the Earth’s tectonic plates shifted, ended up too isolated from the mainland for vertebrates to make their way over to it. There were no terrestrial mammals on Grand Terre at the time of separation so, in the absence of large mammalian predators, the lizards took over the various feeding niches. Over 70 species of geckos (mostly) and skinks have evolved in solitude with few hunters, except each other. So among these endemic geckos and skinks are found the world’s largest versions. The giant gecko in the endemic genus Rhacodactylus is the heavyweight at about half a pound and measuring 17 inches including the tail. It is essentially the T. rex of the island, eating other vertebrates. Running away from the giant gecko are more than two dozen species of skinks, including one of the world’s longest skink species.

The largest skink in terms of body weight and length is the Solomon Islands skink from the nearby archipelago. It averages 23 inches in length and weighs almost two pounds. Interestingly, the skinks in the Solomons are entirely herbivorous and live up in the canopy of strangler fig trees, ingesting the leaves of the plants that grow as epiphytes on their branches.

The Solomons skink has the benefit of hiding in the dense foliage of the tall trees. But if you are our local five-striped version that lives on the ground, better to keep a wary eye out and thinking fast—if you are quite attached to keeping that stunning blue tail. 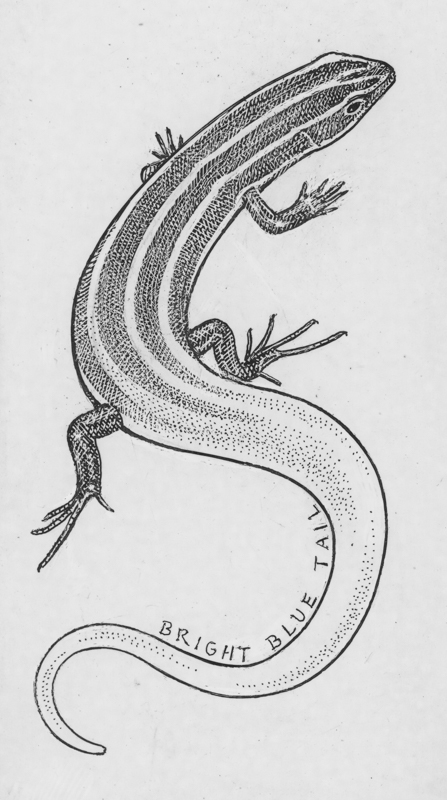