The signs of spring are everywhere for avid naturalists: the opening of mysterious purple and yellow pawpaw flowers; the voluptuous leaves of skunk cabbage emerging from the damp soil; the lusty singing of spring peepers from the vernal pools and ponds; wood ducks on the canal, male and female pairing up for nesting season.  But for those with an eye for butterflies, the flight of the Mourning Cloak is a certainty that the days are growing longer, and the sun will indeed shine warmly again, after a cold damp winter marked by a parade of grey days.

Perhaps one reason why naturalists first learn their birds or plants, and arrive late to butterflies and moths, is that the former are easier to identify than the latter.  Birds are colorful and sing, and there are numerous field guides–and now downloadable recordings –to teach the neophyte. Plants sit still for you, and you can even whip out your cell phone, upload the image to a program like LeafSnap, and presto! you have the name of the species sent to your phone.

There are websites to learn the names of butterflies or to send an image to, but try and get many of our species to sit still long enough for a photo. And some of the groups are difficult for the amateur to tell apart, like the numerous kinds of skippers. But there is really no way to confuse a Mourning Cloak with any other butterfly. For the Mourning Cloak, there is no pairing of similar species, as there is for the Monarch or Viceroy or the various swallowtails meant to frustrate the beginning lepidopterist. The Mourning Cloak is a large butterfly, with a wingspan of four inches, and the only species with a dark maroon color to its dorsal side, trimmed with pale-yellow edges that resemble a butterfly with its petticoats showing. The black border between the Maroon “cloak” and the yellow petticoat is made all the more lively by bright blue iridescent spots.

The Mourning Cloak is also among the longest-lived of all butterflies, with a lifespan of 11-12 months. In our area during the summer, the species feeds on the sap of trees, then goes into a suspended state called estivation (similar to that of amphibians), but becomes active again in the fall to feed and store up food—more sap from oak trees—to survive the winter. Come spring, Mourning Cloaks are the first on the wing.

When a Mourning Cloak has landed, you might not see it right away. Because it holds its wings upright, the ventral side of the wings is perfectly camouflaged against the tree bark. Females are soon off again to lay their eggs on the leaves of the preferred food of the spiny caterpillars that emerge when their eggs hatch: elm, willow, cottonwood, aspen, birch, or hackberry trees.

Mourning Cloaks are quite common across not only North America, but northern Europe and northern Asia as well. Does their success in numbers and distribution have to do with their relative longevity? No one really knows.

Nor is there consensus on the most existential question of them all for a butterfly: why go through metamorphosis? Why not hatch out from an egg and be done with it? Why go through life first as a caterpillar, then form a chrysalis, and then emerge as an adult? All for the sheer drama of the transformations from ugly, often stinging larvae to dull colored cocoons, to emergent gorgeous butterfly. In England, another common name for the Mourning Cloak is the Grand Surprise butterfly. And is there a grander surprise than a butterfly emerging from its dull earth-tone pupae as one of the most beautiful creatures on Earth?

Evolutionary biologists point towards competition to explain many phenomena in nature and typically see the evolution of true metamorphosis through this lens. They hypothesize that the main advantage of complete metamorphosis is to remove competition between the young and old. In essence, larval insects and adult insects fill different ecological feeding niches. Caterpillars feed on leaves and all they do is eat, showing complete indifference to reproduction. In contrast, adult butterflies visit flowers in search of nectar and mates. The theory goes that because larvae and adults do not compete for food or shelter, more of each can coexist relative to species in which the young and old live in the same locales and eat the same things. It’s all about survival.
There are other theories as well, but, however metamorphosis evolved, the enormous numbers and diversity of metamorphosing insects on Earth, the predominant life form on this planet, clearly show that it must have value as an evolutionary strategy for successful reproduction. Kafka’s Gregor Samsa may have woken up surprised and miserable but, from a naturalist’s point of view, he joined a very successful way of life. And if he had turned into a Mourning Cloak instead of a bug, he might have been happier for it, too. 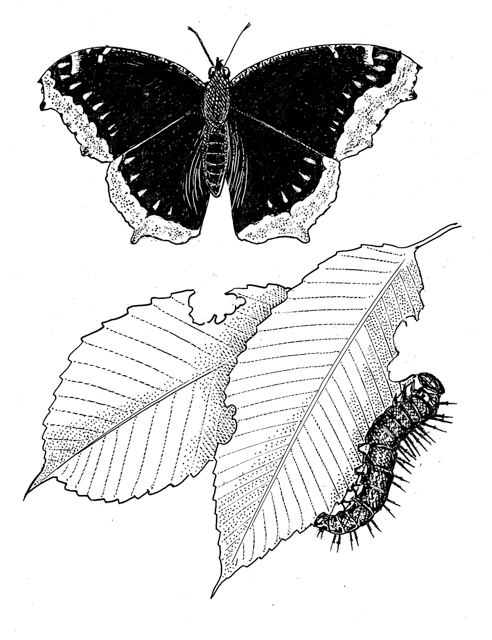