At first glance, the diminutive Winter Wren is nothing to write home about. A plump lump of a bird covered in dull dark brown, barred plumage, this winter visitor is one of our smallest North American bird species. And then there is that rather silly-looking short tail, often held in the upright position, as if this appendage got stuck in the manufacturing process. Unlike other bird species, where males have more flamboyant feathers while females stay understated to avoid attracting predators to their nests, the feathers of adult male and female Winter Wrens are almost identical.

The Winter Wren breeds in the far northern forests in conifer stands and dense broadleaf forest groves, nesting high in tree cavities where it can find them, and feeding on bugs up in the trees. But in winter, the bird moves south, and can be found in the woods around Cabin John and elsewhere in Maryland and Virginia. Rather then stay in the trees as in the breeding season, our winter visitors spend their days on the forest floor, searching cracks and crevices and even venturing into cavities and underground openings, selecting from an invertebrate menu “the daily special”–whatever is creeping or crawling at that moment from November to March. It is this penchant during winter foraging for exploring caves and crannies that gave rise to the Winter Wren’s scientific name—Troglodytes, similar sounding to troglodyte. Today,  the derogatory epithet “Troglodyte” is typically applied to a person who is considered reclusive, reactionary, or whose views are out-of-date. The origin of its use, however, was to describe the lifestyles of cave-dwelling prehistoric humans.

On the winter range all you will hear from the Winter Wren is an unimpressive, sparrow-like klip-klip emanating from its equally undistinguished short bill. If that’s all there was to the call, my account of this creature could pretty much stop here and move on to the next bird.

But take a walk if you can in the northern forests in spring. Your ears would perk up and you would become determined to seek out the songster that is filling the forest with the longest, one of the loudest, and certainly the richest notes uttered by any North American species. There on a branch, announcing, “this is my territory”, is the creature we nonchalantly pass over in winter—the diminutive Winter Wren. In fact, adjusted for it’s body size, the Winter Wren may have the loudest call of any bird in the world. Scientists have determined that per unit of weight, the Winter Wren delivers its song with 10 times more power than a crowing rooster.

Another fascinating fact about the Winter Wren is that until recently it had one of the largest ranges of any bird, stretching across the northern hemisphere. Now, geneticists have split this species into three: a Pacific Wren on the Western coast of North America, the Winter Wren across the rest of our continent, and the Eurasian Wren that ranges from Cornwall, England to Korea. Interestingly, Europe, Russia, and the rest of Asia have just this one species of wren in their avifauna. In contrast, wrens exploded in diversity in the New World, with more than 80 species, mostly in the tropics. Perhaps the most appealing singer, at least to me, is the desert species of the southwest—the Canyon Wren, a song marked by powerful descending whistles and fake kisses at the end.

But it is the foraging behavior in winter of our little wren-ball that fascinates me the most: the Winter Wren’s ground-feeding predilection and the way it skulks under leaves or twigs or ventures into brush piles or crevices in search of the hiding places of invertebrates. At least in winter, it feeds more like a mouse than a bird—a mouse with a beak. In New Zealand there is an endemic species of cave-roosting bat that  although it can fly instead it crawls on the ground and feeds on invertebrates just like a small nocturnal rodent. Some desert-dwelling bats in the U.S. hunt on the ground to catch scorpions. It is this ability to shift its feeding style to the season that I find so interesting.

If, no one in the birding literature or naturalists’ journals has offered this aphorism before, I hereby submit it: never judge a bird by its plumage. 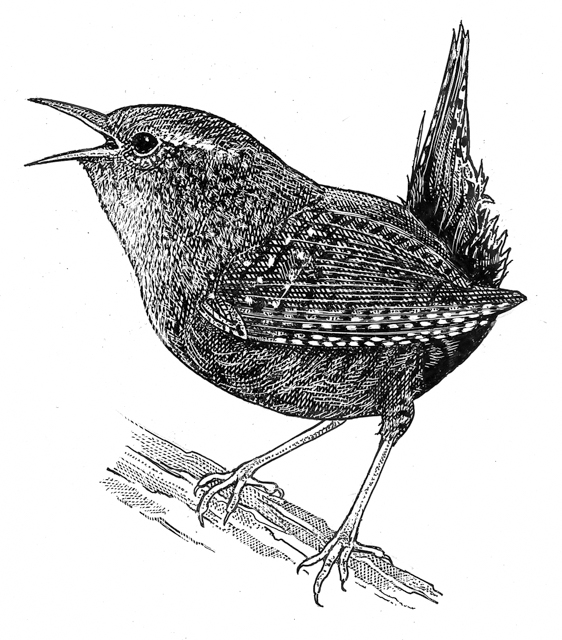